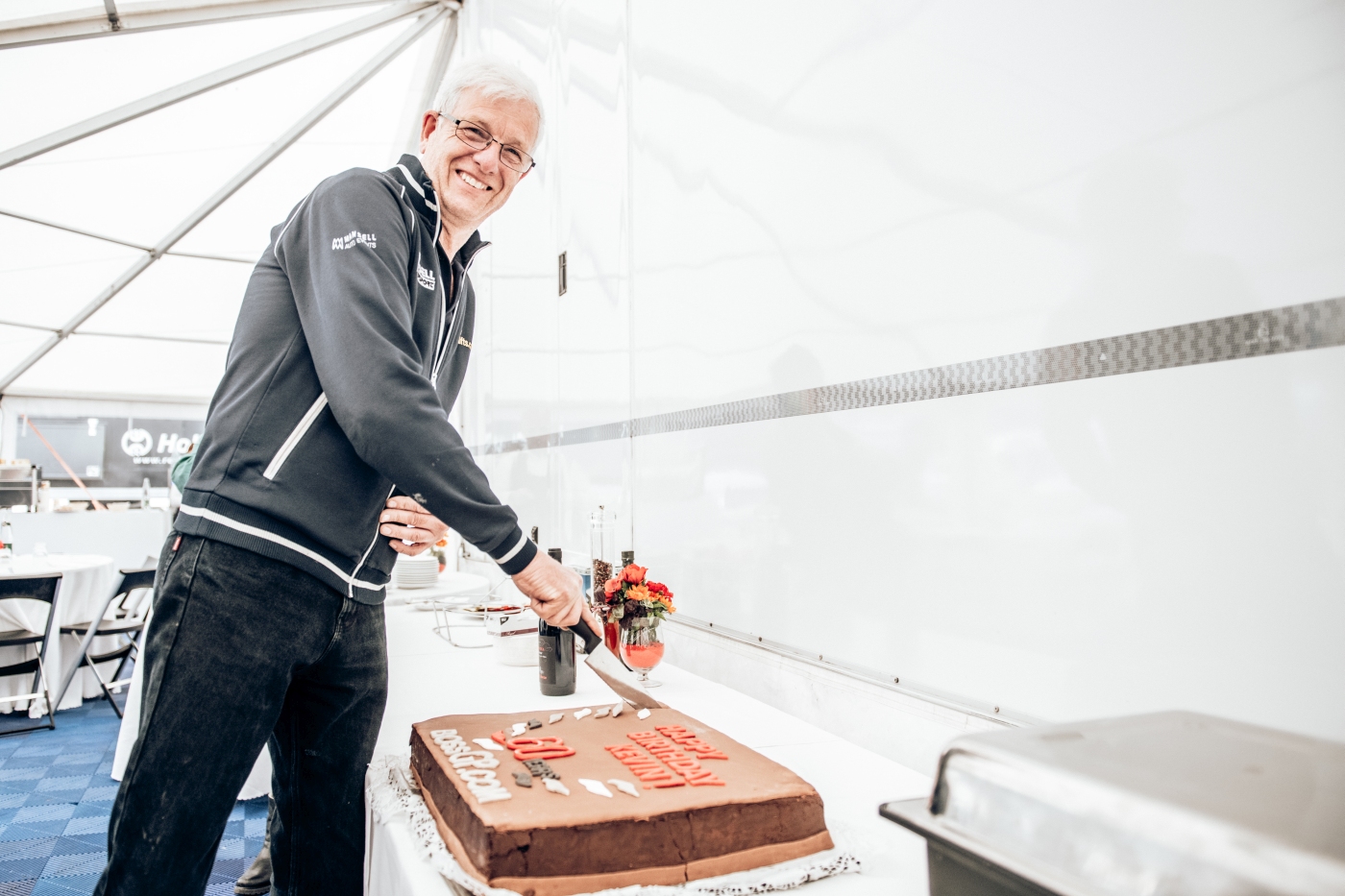 BOSS GP congratulated Kevin Mansell on his 60th birthday with a big applause and a special birthday cake. Mansell was very obviously happy:  “A big thank you to all my BOSS GP friends for the congratulations and the great cake!”

For 18 years, the Brit has been part of the BOSS GP racing series. He won the overall BOSS GP championship in 2004 with his son Scott, as well as the team championship. 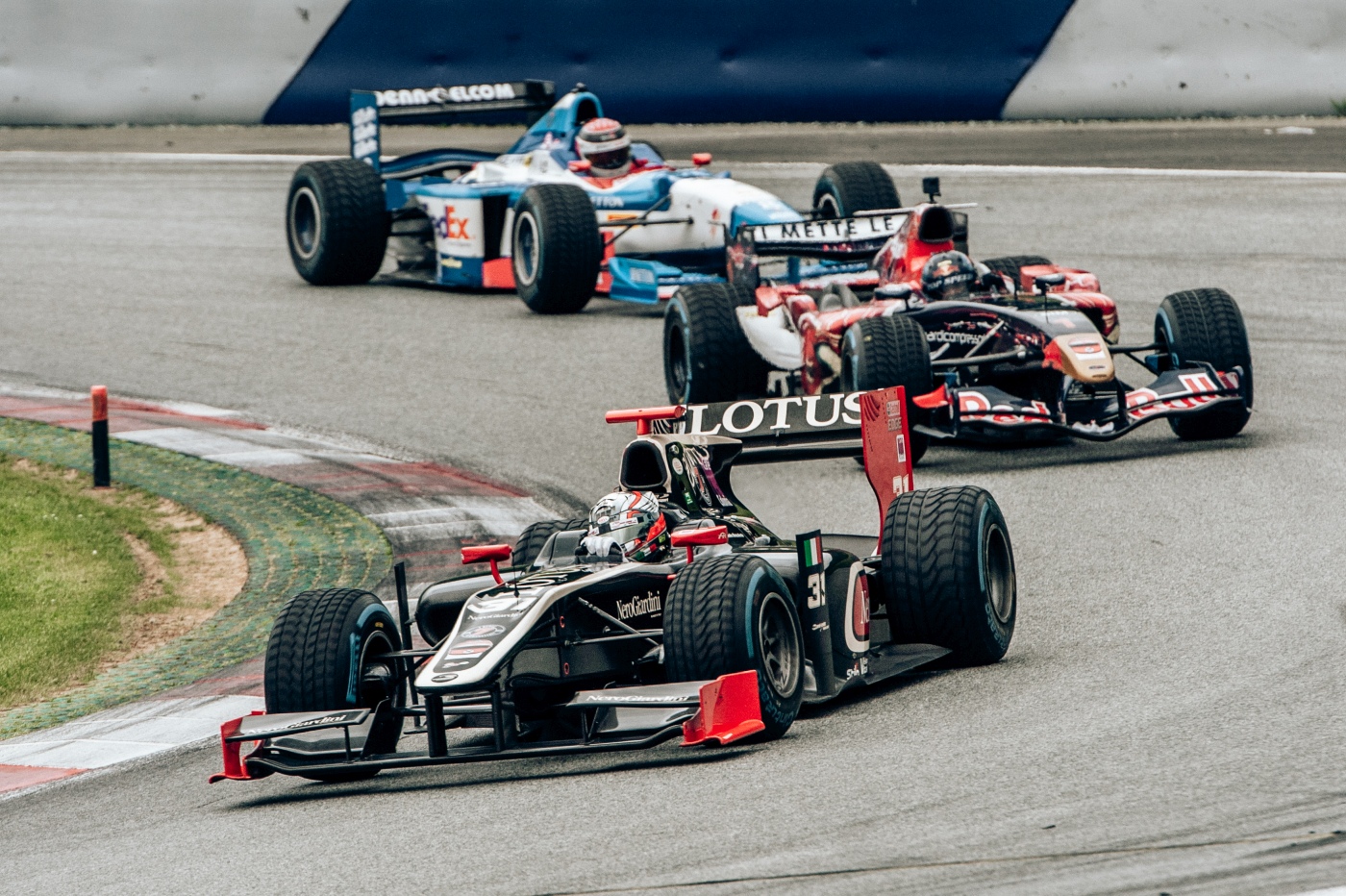 A dramatic race at the end of the Pirelli Masters 2019. Gerstl and Bracalente as lucky winners.

Ingo Gerstl (AUT, Top Speed) had to start from last place like yesterday. However, this did not stop the Austrian from winning his home race in the Toro Rosso STR1 ten-cylinder beast.

Gerstl continuously pushed forwards and passed the naturally slower Formula 2 cars without much risk. In lap 12, he overtook OPEN rival Phil Stratford (USA, Penn Elcom) in the Benetton for second place, one lap later he passed race one winner Alessandro Bracalente (ITA, Speed Center), who had been in the lead up to then.

Just before the start it started to rain. All drivers changed to Pirelli Cinturato rain tyres. In the middle of the race the rain shower stopped, and it began to dry up on the racing line. At that time Rookie Bracalente lost his lead, one lap later after Gerstl he had to let pass Stratford too.

Behind Gerstl and Stratford, the fight for victory in the FORMULA class began: Bracalente had to defend against Marco Ghiotto (ITA, Scuderia Palladio) repeatedly. Four racing cars now fought for overall victory – Gerstl, Stratford, Bracalente and Ghiotto. On several occasions Ghiotto tried to get past Bracalente, but it took him the very last lap to make it.

Gerstl crossed the finish line just 0.4 seconds in front of Stratford. Behind them Ghiotto defended the class lead, but only up to 200 metres before the finish. In the last corner he spun on the slippery track and Bracalente slipped through again – this race couldn’t have ended much more dramatically.

Florian Schnitzenbaumer (DEU, Top Speed), who crossed the finish line behind Bracalente and Marco Ghiotto, also finished on the FORMULA podium today. The reigning FORMULA champion and Armando Mangini (ITA, MM International) fought a duel worth seeing, which was finally decided by a mistake of Mangini in turn 1. Schnitzenbaumer did complain about his own aggressiveness, but with today’s performance he can finally take home a trophy after his retirement yesterday.

Andreas Fiedler (DEU, Fiedler Racing) experienced a weekend to forget. The double winner from Hockenheim could not even start on the first race day, in the second race he retired after six laps. Race 5 and race 6 of the BOSS GP 2019 will follow in three weeks in the Royal Park of Monza. From June 14th to 16th, the BOSS GP will contest the Competizione BOSS GP on the fastest racetrack on the calendar.

Race 5 and race 6 of the BOSS GP 2019 will follow in three weeks in the Royal Park of Monza. From June 14th to 16th, the BOSS GP will contest the Competizione BOSS GP on the fastest racetrack on the calendar. 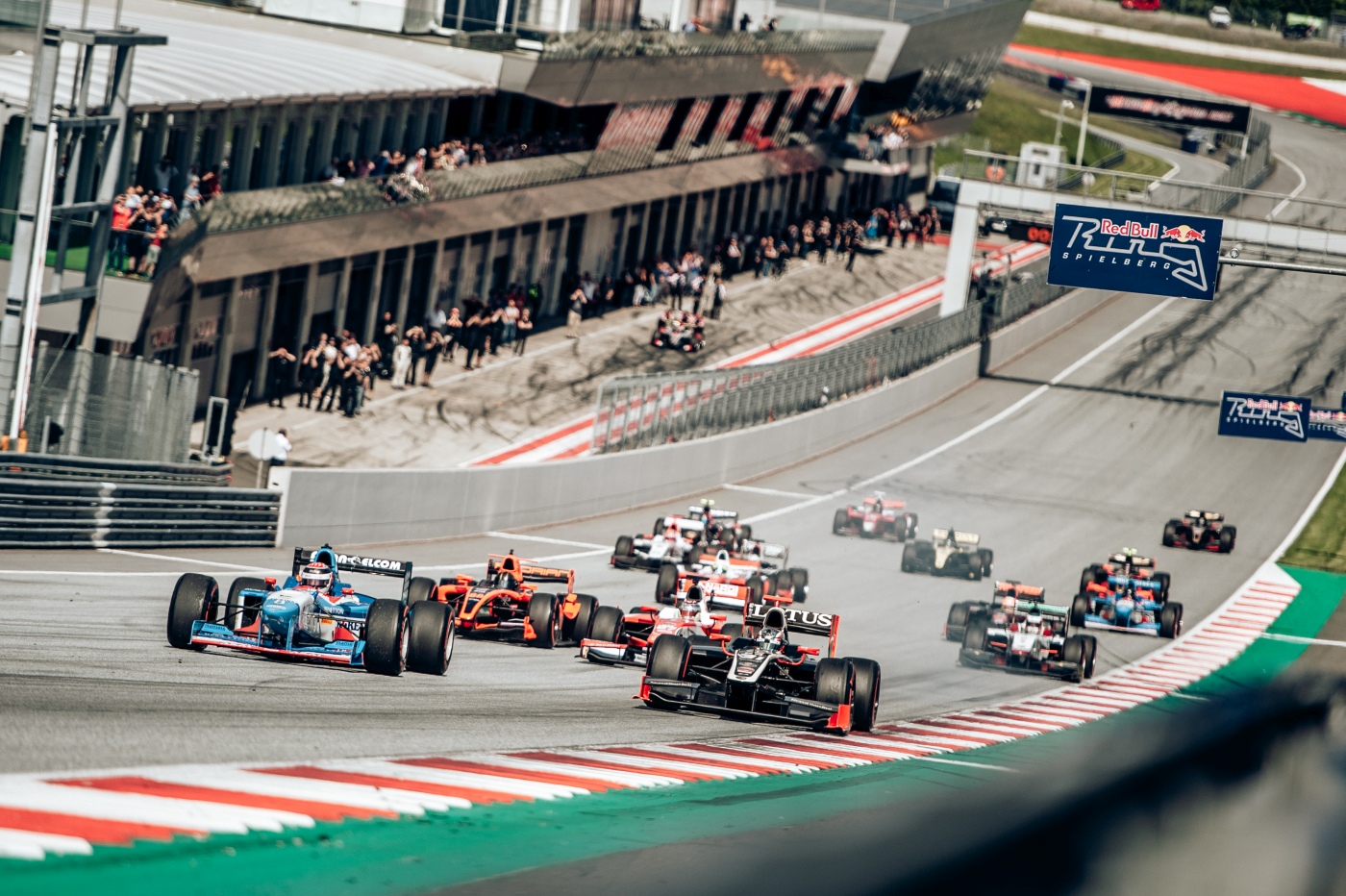 Debut victory for Alessandro Bracalente at the Pirelli Masters.

Alessandro Bracalente (ITA, Speed Center) is the glowing winner of the first of two races this weekend. The rookie wins a BOSS Grand Prix for the first time at only his third start. The 30-year-old was on his unbeatable way right from the start. As the first pursuer of the long-time leader Phil Stratford (USA, Penn Elcom) he took the lead when Stratford slowed down with gearbox problems.

Stratford finished fifth overall and won the OPEN class. Ulf Ehninger (DEU, ESBA Racing) was allowed on the OPEN podium for the very first time. For Ehninger it was the first BOSS GP race. With an overall 9th place he was right in the middle of the action and visibly happy about his success. So it was a double victory for the 1997 Benetton’s.

OPEN championship leader Ingo Gerstl (AUT, Top Speed) started a brilliant race to catch up from last place. But even the fastest race lap didn’t help at the end: After eight laps and just when Gerstl catched leader Stratford, his race ended with a technical problem.

Marco Ghiotto (ITA, Scuderia Palladio) finished fourth, even though Marco was involved in a collision with Florian Schnitzenbaumer (DEU, Top Speed) at the start. Schnitzenbaumer had to retire just at the scene of the accident.

Philippe Haezebrouck (FRA, Inter Europol) was fifth in his class and thus delivered his best performance of the season. Behind him a duel between Salvatore de Plano (ITA, Top Speed) and Gianluca Ripoli (ITA, MM International) was raging for a long time. De Plano beat Ripoli in the end.

Peter Göllner (SUI, Speed Center) finished eighth in the FORMULA. The Swiss started from the penultimate row and made up many places with clever manoeuvres, especially in the early stage of the race. Thomas Jakoubek (AUT, Top Speed) overtook Walter Steding (DEU, Inter Europol) in the last lap, who was in the top-10 for a long time.

Unfortunately, fifth place on the grid remained empty, Andreas Fiedler could not even start the race.

Tomorrow will be the fourth BOSS GP race of the season, starting time is 15:45. Before that there will be a ten-minute warm-up at 10 am. 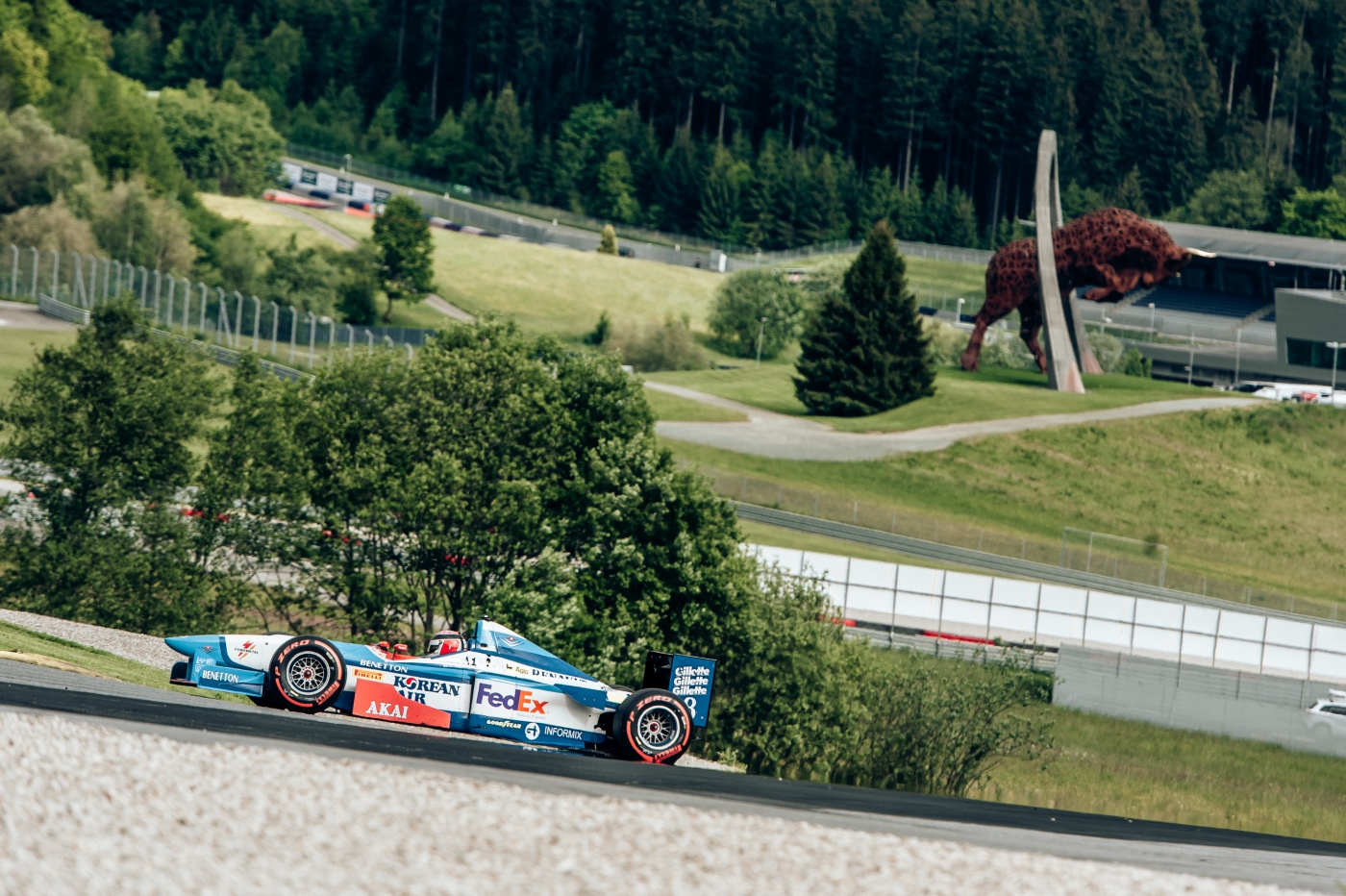 Surprise in qualifying at the Red Bull Ring: Stratford and Bracalente in row 1.

Phil Stratford (USA, Penn Elcom Racing) took pole position in both BOSS GP races at the Pirelli Masters 2019, putting a BOSS GP crowd favourite at the front of the field: Stratford’s Benetton B197 is a real eye-catcher. Since last year, the car also has the signature of his ex-pilot Gerhard Berger on it’s painting. For Stratford, the pole position is his first in the BOSS GP. It’s also a conciliatory result, as last year he was unable to compete in the season finale on this circuit due to a gearbox failure.

With a fabulous time of 1:17.332 min Alessandro Bracalente (ITA, Speed Center) fought his way into the front row. This also makes the BOSS GP rookie the fastest pilot in the FORMULA class.

Florian Schnitzenbaumer (DEU, Top Speed) and Marco Ghiotto (ITA, Scuderia Palladio) will start from row 2. Ghiotto was fastest in the second qualifying group. Little by little he improved his times, at the end he set the very good time of 1:19.158. Similarly well managed Armando Mangini (ITA, MM International) his Pirelli P Zero tyres. The experienced Italian also drove his fastest time at the very end of the 20-minute session and starts alongside Andreas Fiedler (DEU, Fiedler Racing). Yesterday Fiedler complained about problems in the first of the two left corners at the Red Bull Ring. But with 5th place in qualifying the championship leader will be able to have a serious say about the victory

Salvatore de Plano had to change to the spare car this morning. Instead of his yellow-red GP2 Dallara he drives the rest of the weekend with a black-and-red car. Although he only completed seven laps, de Plano was able to finish in the top 10.

Thomas Jakoubek (AUT, Top Speed) is starting the race in 13th place. Ulf Ehninger (DEU, ESBA Racing) in the second 1997-Benetton starts the hunt in 14th place. Ehninger was able to rewind 14 laps without any problems and collected valuable kilometres for him in a Formula 1 racing car he was not used to yet.

The Swiss Speed Center drivers Peter Göllner and Christian Eicke start from 15 and 16.

Ingo Gerstl (AUT, Top Speed) had to move to the second qualifying group after an engine change. With only two laps, OPEN leader Gerstl didn’t set a qualifying time. Gerstl will start from the very last position in the race as it looks. 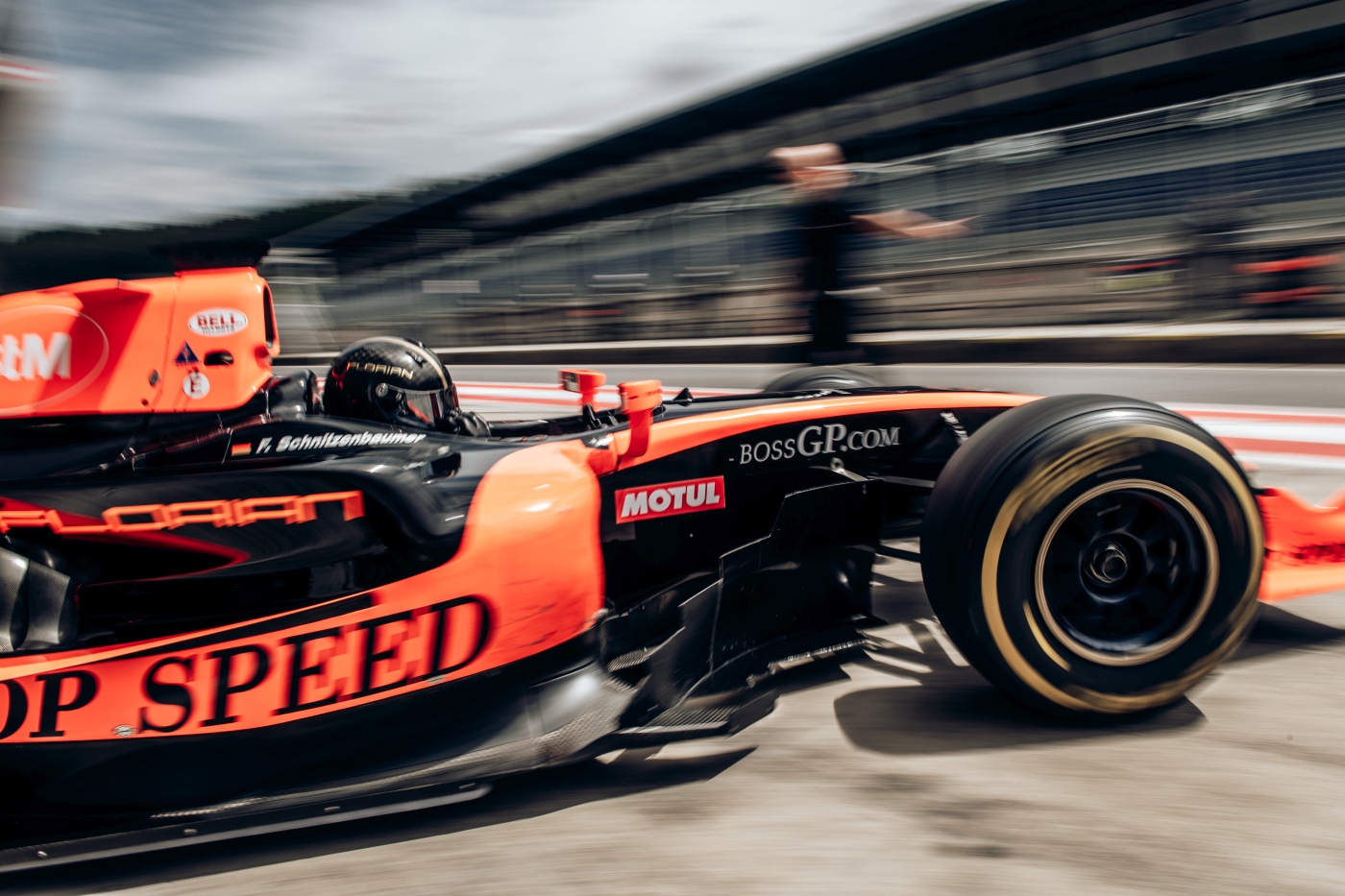 Review of day 1 at the Pirelli Masters in Austria.

The BOSS GP drivers used the practice sessions on Thursday to get familiar with the 4.3-kilometer track and to find the fastest drivers for Q1 tomorrow.

Ingo Gerstl (AUT, Top Speed) secured the best combined time with a 1:11.996 min. The Toro Rosso pilot targeted the BOSS GP record time of 1 minute 10 seconds from last year in the second free practice. A gearbox failure at the very beginning of the session stopped this plan. But tomorrow record champion Gerstl will definitely be at the start again.

The 16 other pilots had no major problems: Phil Stratford (USA, Penn Elcom Racing) set the best time in the second free practice session with 1:17.078, even though the Benetton driver only completed one installation lap in the first practice session.

The fastest FORMULA driver in today’s session was BOSS GP rookie Alessandro Bracalente (ITA, Speed Center). He was followed by Florian Schnitzenbaumer at his comeback. The reigning BOSS GP FORMULA champion will probably start 2019 only on this one race weekend. With the fourth-best total time he can compete tomorrow in Q1. Also qualified for Q1 is Sergio Ghiotto (ITA, Scuderia Palladio).

Brother Marco (ITA, Scuderia Palladio) failed like Hockenheim double winner Andreas Fiedler (DEU, Fiedler Racing) at the cut by a few tenths of a second. But tomorrow in Q2 the two will have more driving time at their disposal to complete a fast lap. Luca Martucci (ITA, MM International) was faster than fellow countryman Salvatore de Plano (ITA, Top Speed) today, and thus confirmed his performances at the Red Bull Ring from last year.

The qualifying for the 17 pilots will take place tomorrow at 10:45 am. Today’s top 5 start in Q1 (8 minutes time), the remaining drivers in Q2 (20 minutes time). The fastest driver from the two combined sessions will be the first to start the race at 3:30 pm. 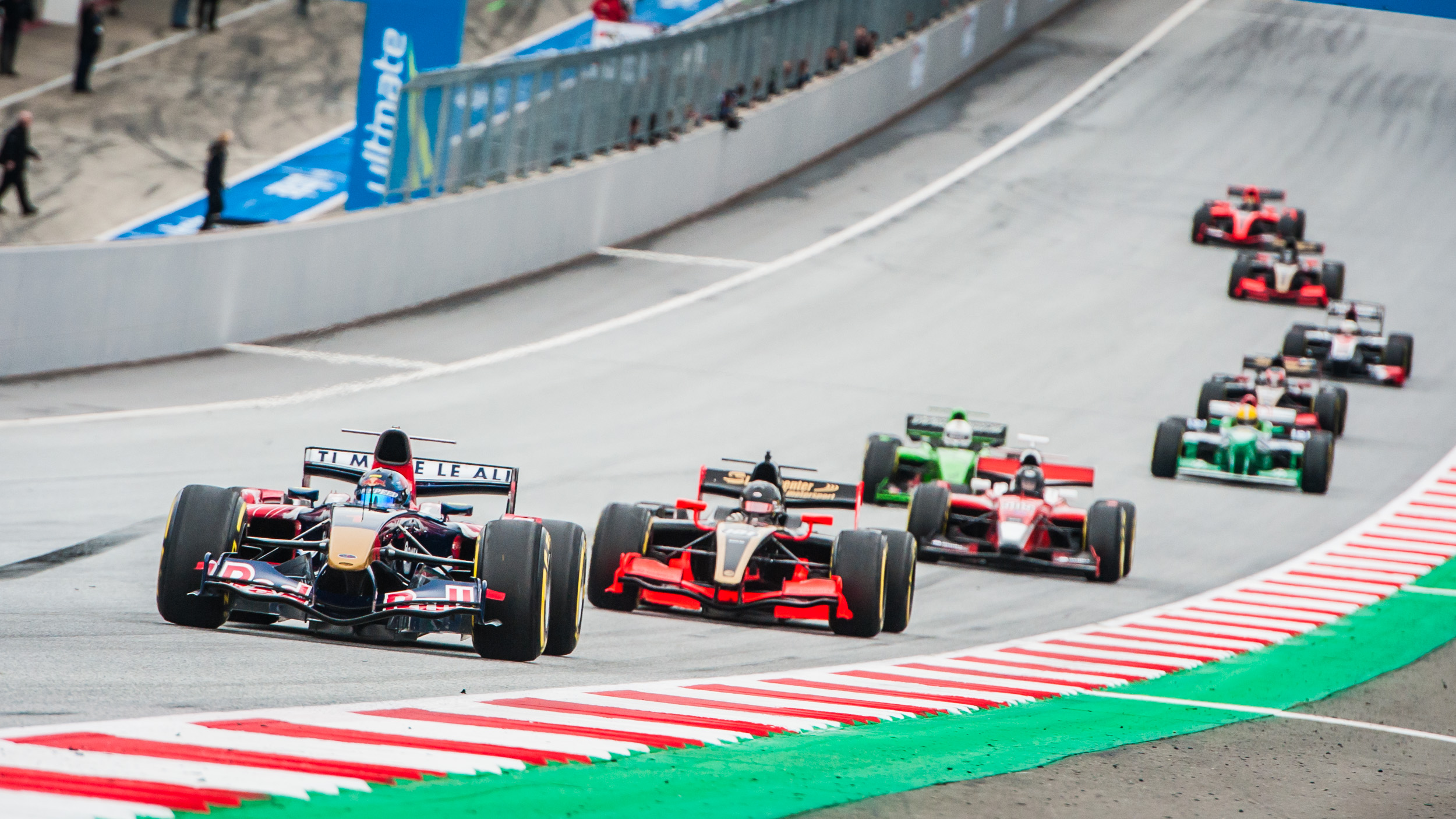