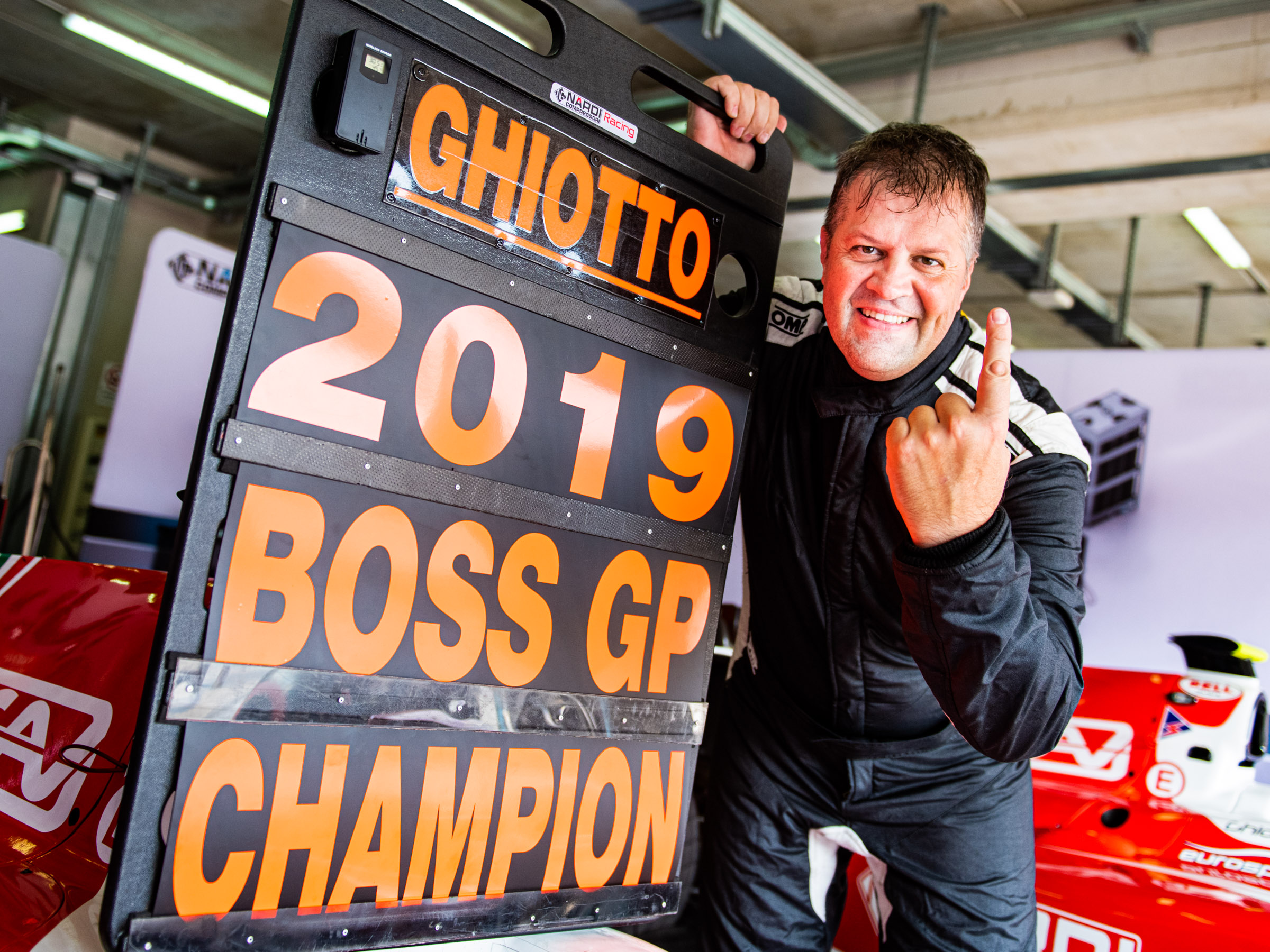 How can it be better? The final decision for the championship title in the FORMULA class was made in the twelfth and last BOSS GP season race of 2019. Marco Ghiotto (ITA, Scuderia Palladio) went into the race weekend with better chances. After Alessandro Bracalente’s (ITA, Speed Center) victory in Saturday’s race his lead reduced from 15 to 12 points. This means: Ghiotto had to be at least sixth today if Bracalente scores another victory in Sunday’s race.

Ghiotto already had a shock moment at the start of the warm-up lap when his red GP2 Dallara did not come off the spot. Lucky for Ghiotto: Because a second car also stopped, Ghiotto could line up again in the second row of the grid for the rolling start. The Scuderia Palladio was able to breathe a short sigh of relief.

The best start behind OPEN champion Ingo Gerstl (AUT, Top Speed) had Luca Martucci (ITA, MM International), who almost caught Bracalente at the top. Ghiotto not only lost the place to Martucci, but also to Salvatore de Plano (ITA, Top Speed). However, Ghiotto overtook both again in the early stages and even managed to catch up with Bracalente with a couple of fast lap times. With second place he was fully on target for the title.

And it remained like that. Bracalente won the last race of the season and ended the year with an incredible result for a rookie: 5 victories, 10 podium places and only two retirements. In the end, one too many to defeat his fellow countryman Ghiotto, who also has a great score: 9 podium finishes and 2 victories, but only one DNF. After six exciting race weekends in Hockenheim, Spielberg, Monza, Assen, Brno and Imola, the new FORMULA champion Ghiotto and his opponent Bracalente finally separated by only nine points.

Third place in the race went to Martucci, who fought again with de Plano until the middle of the race. De Plano finished fourth ahead of Andreas Fiedler, who secured third place in the championship with a damaged gearbox.

The best duel was delivered by Philippe Haezebrouck (FRA, Speed Center) and Gianluca Ripoli (ITA, MM International), with a better end for the Frenchman. Until the last lap both were within striking distance of each other on the 4.9-kilometer course. Towards the end of the 25-minute race, Peter Göllner (SUI, Speed Center) also caught up with the two, but could no longer attack. He finished the season with a respectable eighth place. Nicolas Matile (MCO, Zig-Zag) finished ninth in the class. By the way good news for the championship: His Team Zig-Zag Motorsport Service announced that they would be competing in more than two races next year.

Overall winner of the race was Ingo Gerstl (AUT, Top Speed), who once again put the pedal to the medal today in his Toro Rosso STR1. Although his mechanics gave everything, Phil Stratford had to load his Benetton B197 into the van early due to a defect. Second in the OPEN class and new runner-up instead is “Piter” (FRA, Ray-Ban), whose team managed to repair a big oil leak just before race began.

Next up: The BOSS GP annual award ceremony will take place on 7 December in Salzburg. 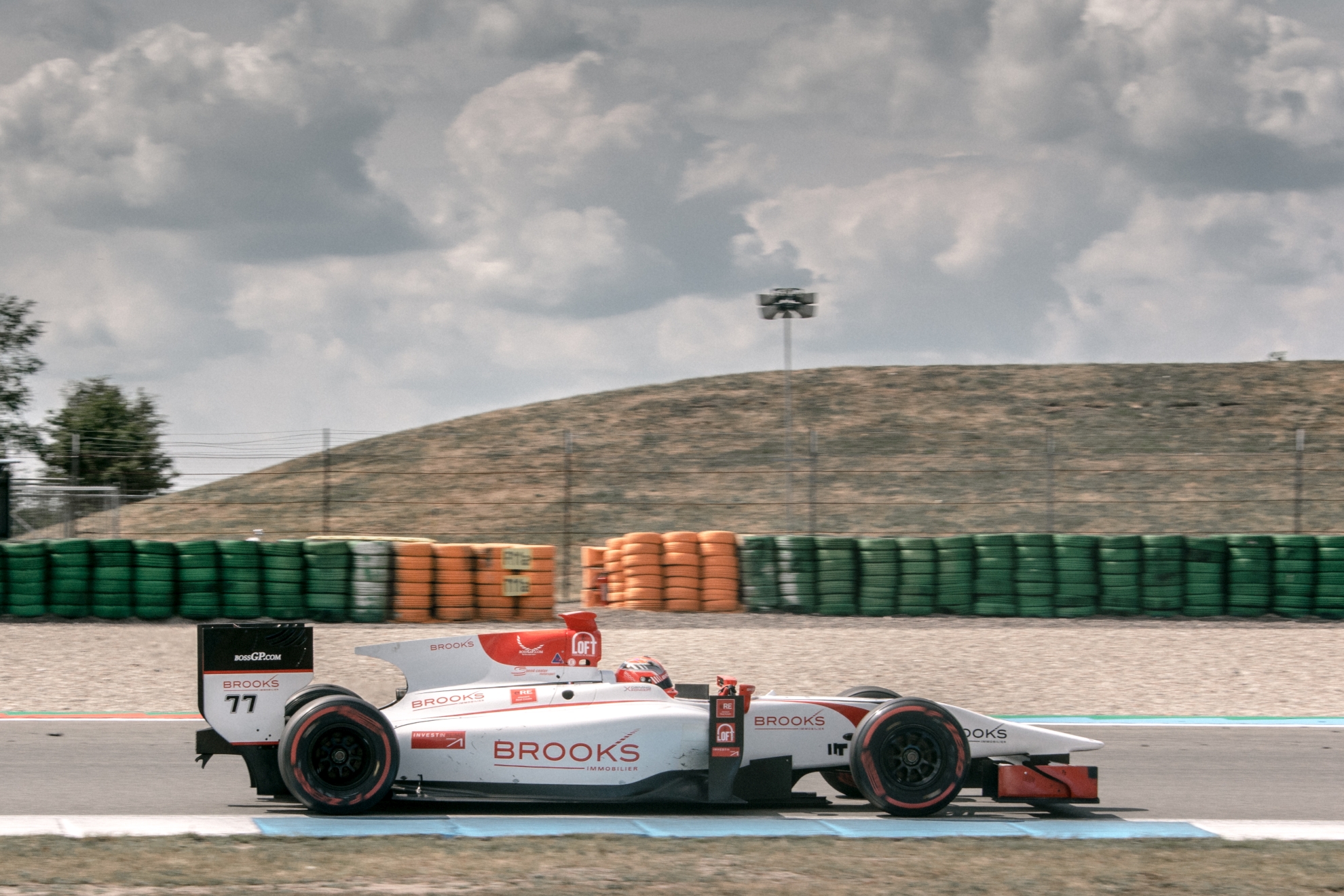 Here we go: Day 1 for BOSS GP in the Netherlands!

Two half-hour practice sessions were held on the first race day in the Netherlands. The driving time was used extensively by the 17 pilots, some of them completed over 35 laps. The BOSS GP pilots gathered experience for the remaining weekend, although according to the weather forecast it could rain tomorrow as opposed to today.

The fastest time was once again set by Ingo Gerstl (AUT, Top Speed), who even beat his own track record in the Toro Rosso STR1 with a time of 1:18.246. It was also the Austrian who, together with Alessandro Bracalente (ITA, Speed Center), represented the BOSS GP at yesterday’s show run in the city centre of Assen. On the “Coulthard Road”, BOSS GP showed what 800 hp are capable of. Over 200 kph and “donuts” on public roads delighted the approximately 20,000 fans.

Back to the Friday practice sessions: Marco Ghiotto (ITA, Scuderia Palladio) set the tone for the FORMULA cars. The leader of the standings underlined his favourite role for qualifying tomorrow morning (Saturday, 10:50 a.m.) with the best time in the class of FORMULA cars. Second fastest FORMULA driver today: Luca Martucci (ITA, MM International) ahead of Bracalente, who is obviously trying to recover from Monza’s messed up weekend. Today’s fourth best time brings him into the top 5 and thus into Q1.

The biggest surprises of today’s practice day were Philippe Haezebrouck (FRA, Speed Center) and Peter Göllner (SUI, Speed Center). Göllner finished fifth with 1:29.729 in the Free Practice 2, Haezebrouck sixth with 1:29.8. Also “Piter” (FRA, Ray-Ban) was able to impress and could play a bigger role in the midfield this time than in previous races.

For BOSS GP this race weekend will kick-off second half of the season. After Hockenheim, Red Bull Ring and Monza the races 7 (Saturday, 17:10) and 8 (Sunday, 11:50) will take place in Assen. Tickets are still available on site.