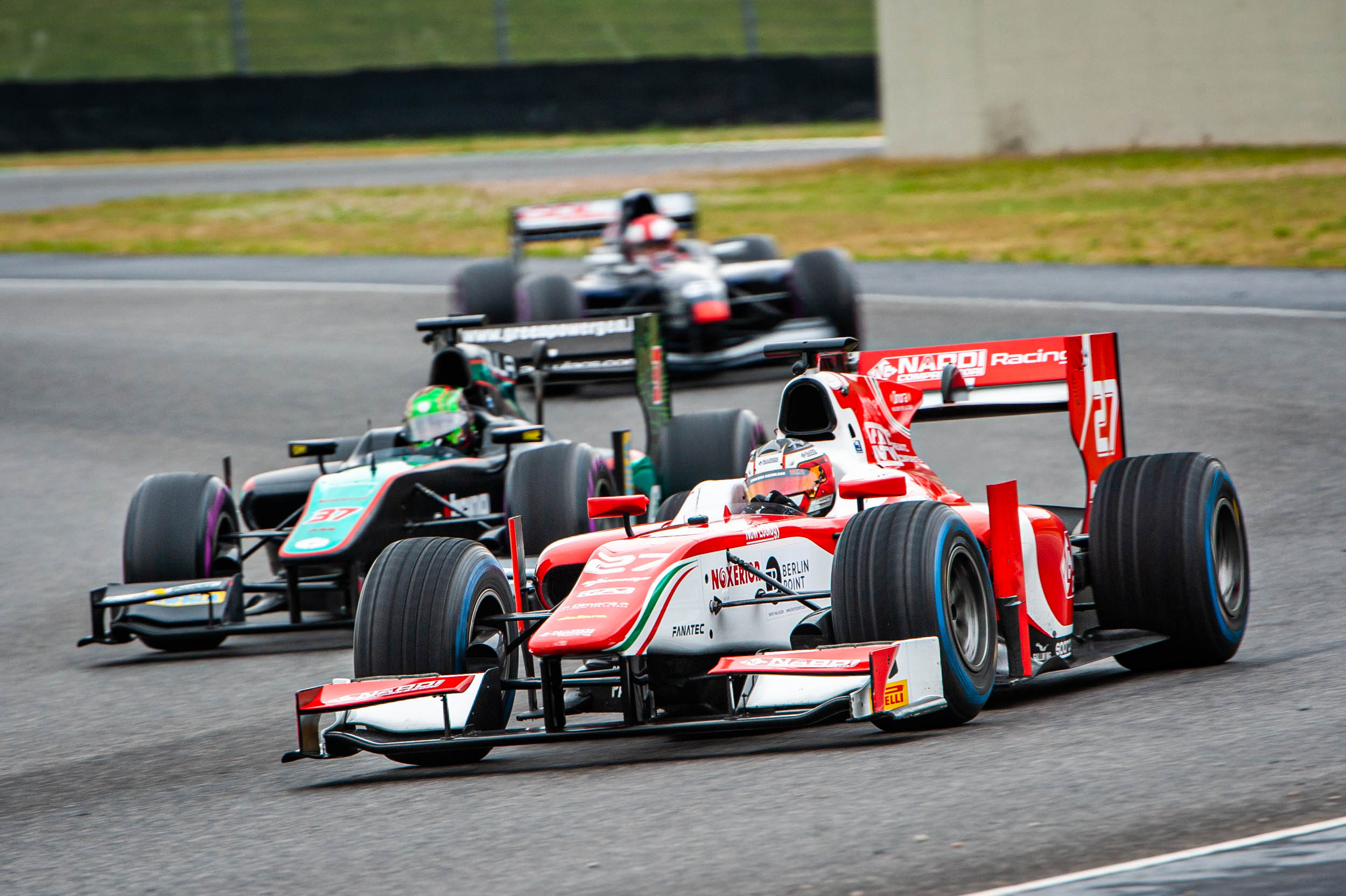 Marco Ghiotto beats everyone in the first race of the season. Premier victory for Ulf Ehninger in OPEN class.

Hectic hustle and bustle just before race start on the grid. Most of the teams changed from the Pirelli Cinturato rain tyres to the P Zero slicks. The rain had stopped before the start of the race, so that a large part of the 5.2-kilometre-long track had dried up. Nevertheless, a small group of drivers including Marco Ghiotto (ITA, Scuderia Palladio), Andreas Fiedler (GER, Fiedler Racing), Bruno Jarach (EST, Eesti Motorsport) and Formula 3000 individual Walter Colacino (ITA, Colacino), relied on the wet weather tyres from exclusive supplier Pirelli.

It was soon clear that they had bet on the right card. Ghiotto was already in front under hard braking into the first corner. Pole setter Marc Faggionato, who was cautious at the start, immediately lost a few places. Gianluca De Lorenzi (SMR, GDL Racing) slid into the gravel with under-tempered slicks in the wet, but was able to continue and Simone Colombo (ITA, MM International) was also only just able to avoid a spin in the first couple of corners.

Marco Ghiotto’s first pursuer was Andreas Fiedler (GER, Fiedler Racing), who started the race from only 11th on the grid and crossed the start-finish line in second place after lap 1. But on lap 4, the German parked his GP2-Dallara in the paddock and was sad about the missed chance.

But the action continued: Ingo Gerstl (AUT, Top Speed), who had started from pitlane with his Formula 1 Toro Rosso, tried to get through the packed field. In lap 5 he had reached the front of the pack and started chasing Ghiotto, until tyre blistering stopped him as well. At that time Luca Martucci (ITA, MM International) took over second place. Martucci drove the fastest race lap but lost too much time to Ghiotto in the early stages of the race. Meanwhile, the 2020 and 2021 FORMULA champion was looking for every wet spot on the asphalt to keep his rain tyres alive. A late safety car period helped Marco Ghiotto to clinch the race victory.

Martucci finished second and made up six places compared to qualifying. Gianluca De Lorenzi recovered quickly from his initial excursion into the gravel trap, third place is the well-deserved reward on his BOSS GP debut. Ulf Ehninger (GER, ESBA Racing) benefited from Gerstl’s retirement, but the Benetton driver can still refer to a controlled race in slippery conditions. Even a short ride through the gravel could not stop Ehninger. He was awarded with a well-deserved winner’s trophy in the OPEN class – the first of his BOSS GP career!

Nicolas Matile (MCO, Zig-Zag) and Bruno Jarach (EST, Eesti Motorsport) had a lap-long duel. Matile in the Auto GP was slightly faster in the corners, Jarach in his GP2 on the straights. In the end Matile was able to beat Jarach, which meant sixth place for the Monegasque.

The race of Simone Colombo (ITA, MM International) and Marc Faggionato (MCO, Zig-Zag) ended unhappily in the gravel bed of turn 1. In the duel for the podium, the two collided slightly. The revenge of the beaten may follow tomorrow. Race 2 starts at 14:25 local time. The race will be broadcast on Italian television (MS Motortv) and on race organiser Gruppo Peroni’s YouTube channel. Before that, a warm-up will be run at 10:00 am.