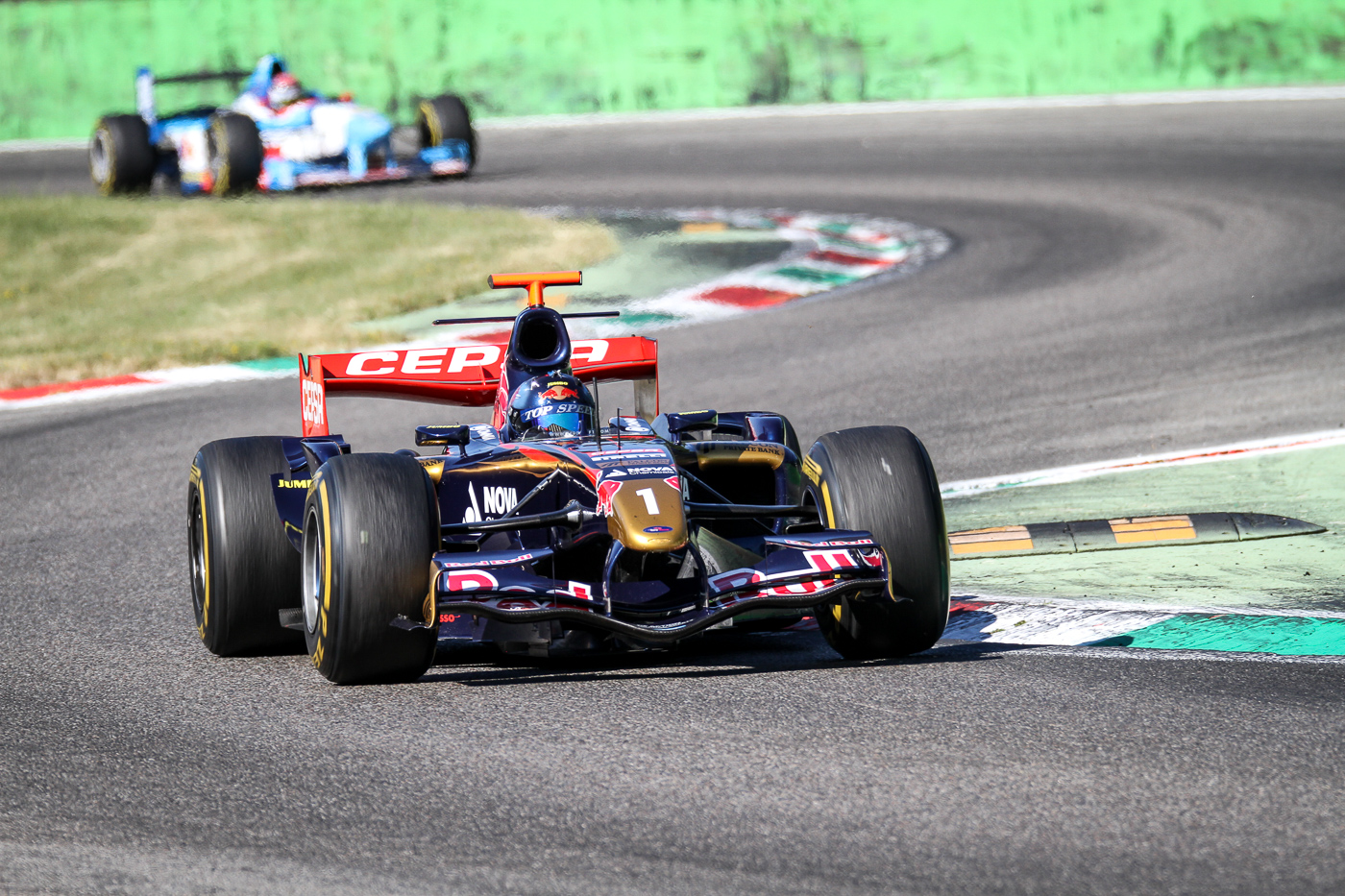 Monza got to see a lot of BOSS GP action: Ingo Gerstl in his Toro Rosso and Phil Stratford in the Benetton had a long duel for victory. And the FORMULA was not only hot because of the temperatures, the winner was an Italian: Marco Ghiotto.

The start was spectacular, sometimes four cars were racing side by side. Walter Steding (Inter Europol Competition), Florian Schnitzenbaumer (Top Speed) and Andreas Fiedler (Fiedler Racing) got the best start from the rear. The first neutralization (yellow flags and no overtaking on the full course) was provided by David Moretti (Griffith’s), who got stuck after only one lap on one of the yellow speed bumps off the course.

At the restart, there were duels for the lead in the OPEN and FORMULA classes. Ingo Gerstl (Top Speed) was unusually behind Phil Stratford (Penn Elcom Racing) during the first laps. The US-American in the Benetton collected his first leadership kilometers this year. But halfway through the race he could no longer resist. The Austrian Gerstl speeded up and overtook Stratford on the long start-finish straight, just before braking into the first chicane. Gerstl finished the race about one second ahead of Stratford. Marco Ghiotto, who started as third (and first of the FORMULA class) lost the lead after the restart briefly to Andreas Fiedler (Fiedler Racing), who had reacted earlier to the Green Flags. Fiedler couldn’t stay in front of Ghiotto. During his overtaking manoeuvre Fiedler had to avoid the run-out zone, but second place in the FORMULA classification means another podium place for the German. Ghiotto (in the ex-car of Charles Leclerc) sensationally won his class at his comeback after three years of racing abstinence.

There almost was an Italian double victory at the home race. Armando Mangini (MM International) started into the 20-minute race from 6th place. In the initial phase, Mangini lost a few places, but gradually moved up to second place in the FORMULA. However, a spin ended his race prematurely. Behind Ghiotto were Andreas Fiedler and Florian Schnitzenbaumer (Top Speed), who finished a session for the first time this weekend without any major incidents.

Shortly before the end, Full Course Yellow was proclaimed once again when Walter Steding sunk his good position in the gravel bed of the Lesmo curves. The placings did not change afterwards: The first of two races started under hot conditions. The program had been postponed due to various events in the other races. Shortly before the race the starting grid changed once again when the race commissioners pronounced three grid penalties: Florian Schnitzenbaumer, Karl Heinz Becker and Wolfgang Jordan were moved back five places in the starting grid for driving too fast in the pit lane or crossing the white line at the end of the pit lane.

Even before the start Rinus van Kalmthout (Mansell Motorsport) withdrew. On the way to the pre-start, his Dallara-Judd stopped after a few hundred meters. This means that the 17-year-old Dutchman, who travels full-time in the US Pro Mazda Series, was already out before the start.

Not much better was Wolfgang Jaksch (F Xtreme Racing), who tried to start from the pits with the Super Aguri F1 car, but once again did not come to the hoped-for race. Also his companion Veronica Cicha (H&A Racing) had to return to the pits after only two laps – also the Czech could not resume the race.

Race two starts tomorrow at 11:30. A live stream is available at www.youtube.com/channel/UCvGyIwwZJAmA7AjO9DEQt6Q

Quotes after the race:
Ingo Gerstl: “It was nice to ride next to Phil (Stratford, note). In the fast Parabolica corner I had a nervous car towards the end of the race, the rear slipped quite a bit. Too bad Wolfgang Jaksch didn’t start.”

Marco Ghiotto: “I thought I could ride in the front. But it was the first time I’d driven in three years. For family reasons, I had to take such a long break. This car is a really good car. The restarts weren’t fair, the cars behind me in Full Course Yellow came to close.”