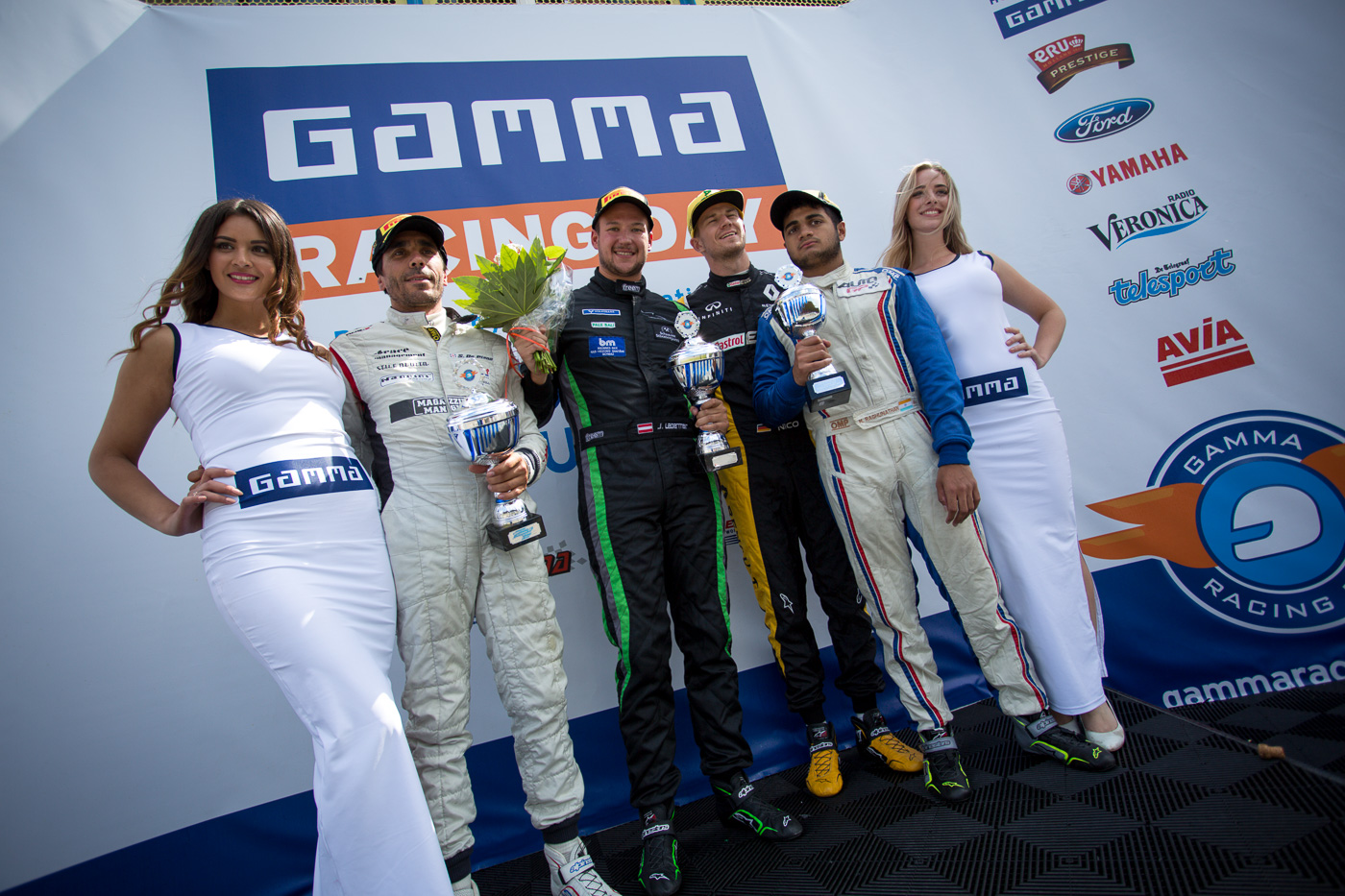 New day, new challenges. Race 2 of the „Gamma Racing Days“ in Assen (NED) went more or less smooth in front of an awesome crowd of 94.500 spectators. Twelve drivers started in the BOSS GP FORMULA class. There were no crashes tough as on Saturday, despite early exits of Veronika Cicha (H&A Racing) and Karl-Heinz Becker (Becker Motorsport).

First trouble occured already before race start. Ingo Gerstl (Team Top Speed, OPEN class), ranked on start position 14 after his early race exit on Saturday, was put on the pole position by a decision of race director and stewards due to safety reasons. „Actually I was surprised about that decision, made by the race management. I didn’t ask for, it was decided because of safety reasons“, Gerstl explained after the race, since there was some trouble about that decision anyway. Finally Johann Ledermair (Ledermair Motorsport), initially set on pole position, started from position 2 of the start grid, followed by Salvatore De Plano (MM International Motorsport) and Mahaveer Raghunathan (PS Racing by Coloni Motorsport).

Ledermair showed a strong performance, dominating the FORMULA grid as on Saturday again. „The car was brilliant, my team has done a great job – everthing worked out smooth!“, Ledermair was fine with his race after the podium ceremony. „I think I lost some time during the yellow flag phase, since there was a signifcant gap to the other cars before the yellow flag and no gap, when the yellow flags were gone.“ Nevertheless the Austrian brougth his second P1 of the weekend home safely, with an gap of 11,673 sec in front of P2, Salvatore De Plano, and driving his fastest lap in 1:25,624 min.

The Italian had have some „tyre trouble“ at the first race on Saturday. „Our race went perfect today. Tyres worked out great, race conditions were fine, it was just a perfect race for us, fantastico!“, De Plano smiled widely after the podium ceremony. He had driven his fastest lap in 1:26,726 and in fact sent Mahaveer Raghunathan on P3. The Indian finished with an significant gap of 18,516 seconds behind De Plano. These are the results of the FORMULA class at race 2 in Assen:

So at the end of the race weekend in Assen, fifth stage of the BOSS GP championship 2017 overall, the total ranking of the FORMULA class hasn’t changed that much: Mahaveer Raghunathan is keeping the lead of the overall ranking with now 213 points, followed by Salvatore De Plano with 199 points. Johann Ledermair follows sharply behind on third rank with now 197 points. 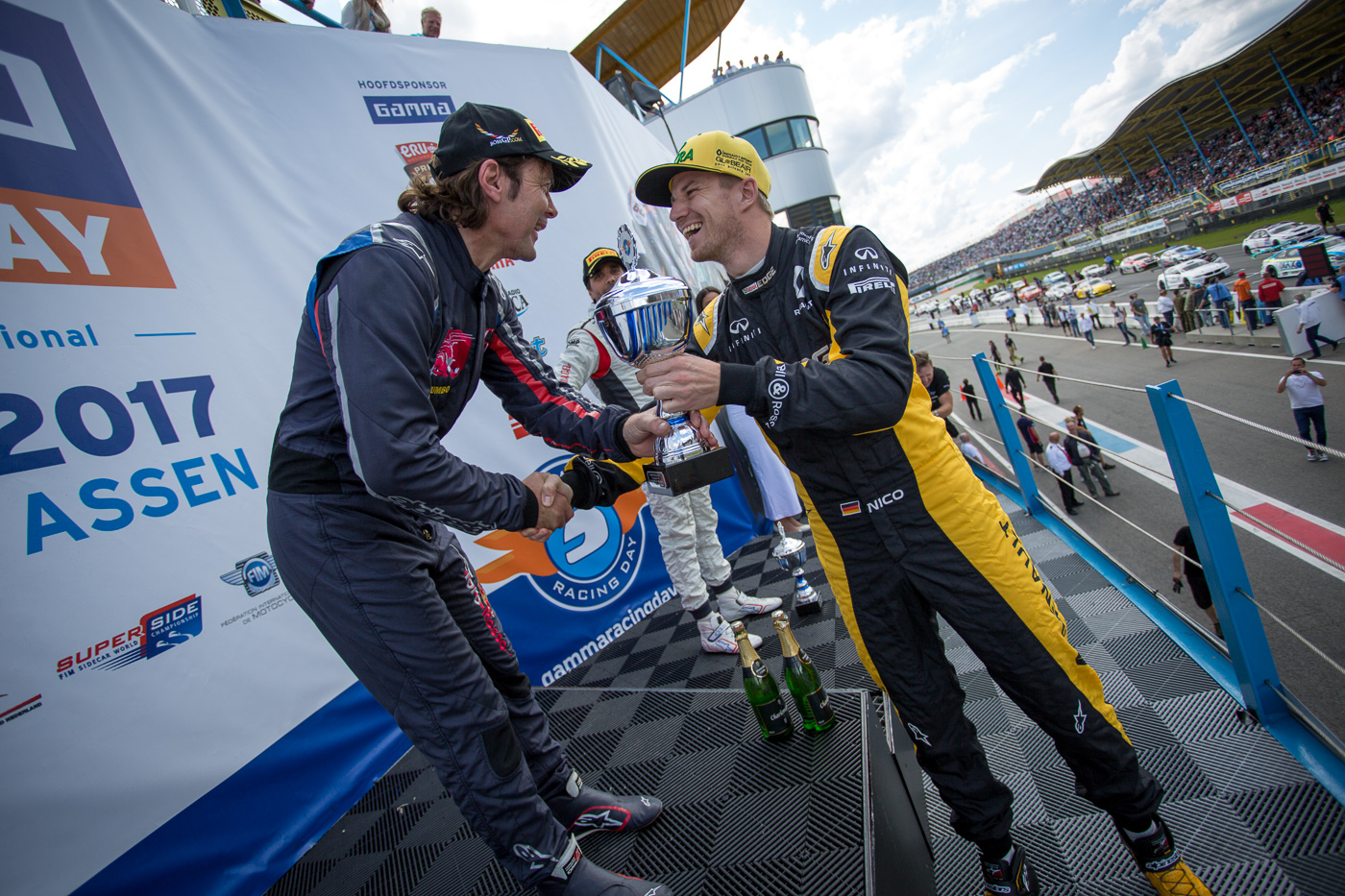 New day, new challenges. Race 2 of the „Gamma Racing Days“ in Assen (NED) went more or less smooth in front of an awesome crowd of 94.500 spectators. Two drivers started in the BOSS GP OPEN class. There were no crashes tough as on Saturday, despite Wolfgang Jaksch had to quit two laps before race finish due to technical issues.

Ranked on start position 14 for Ingo Gerstl after his early race exit on Saturday, the race director and stewards decided for safety reasons to put the Austrian on the pole position anyway. „Actually I was surprised about that decision, made by the race management. I didn’t ask for, it was decided because of safety reasons“, Gerstl explained after the race, since there was some trouble about that decision anyway.

As expected the Austrian dominated the grid from the start, showing a confident race, securing as well the win of the total grid as the P1 of the OPEN class. Gerstl drove his fastest lap in lap 10 with 1:22,277 min, being significant slower than in free practice and Qualifying. „I did what I had to do, but actually didn’t drive faster than necessary. Now I’m happy, that the race and the race weekend are done without any further problems“, the Austrian explained after the podium ceremony. In fact some the trouble about the decision about the start position had affected the focus on the race, as well as the duel against Klaas Zwart, which lots of BOSS GP fans and spectators had hoped and waited for, was heavily missed, due to the crash of the Dutch in the free practice session on Saturday morning. „This was really a crazy race weekend. We hope for a better one at the next stop in Brno“, Gerstl explained. 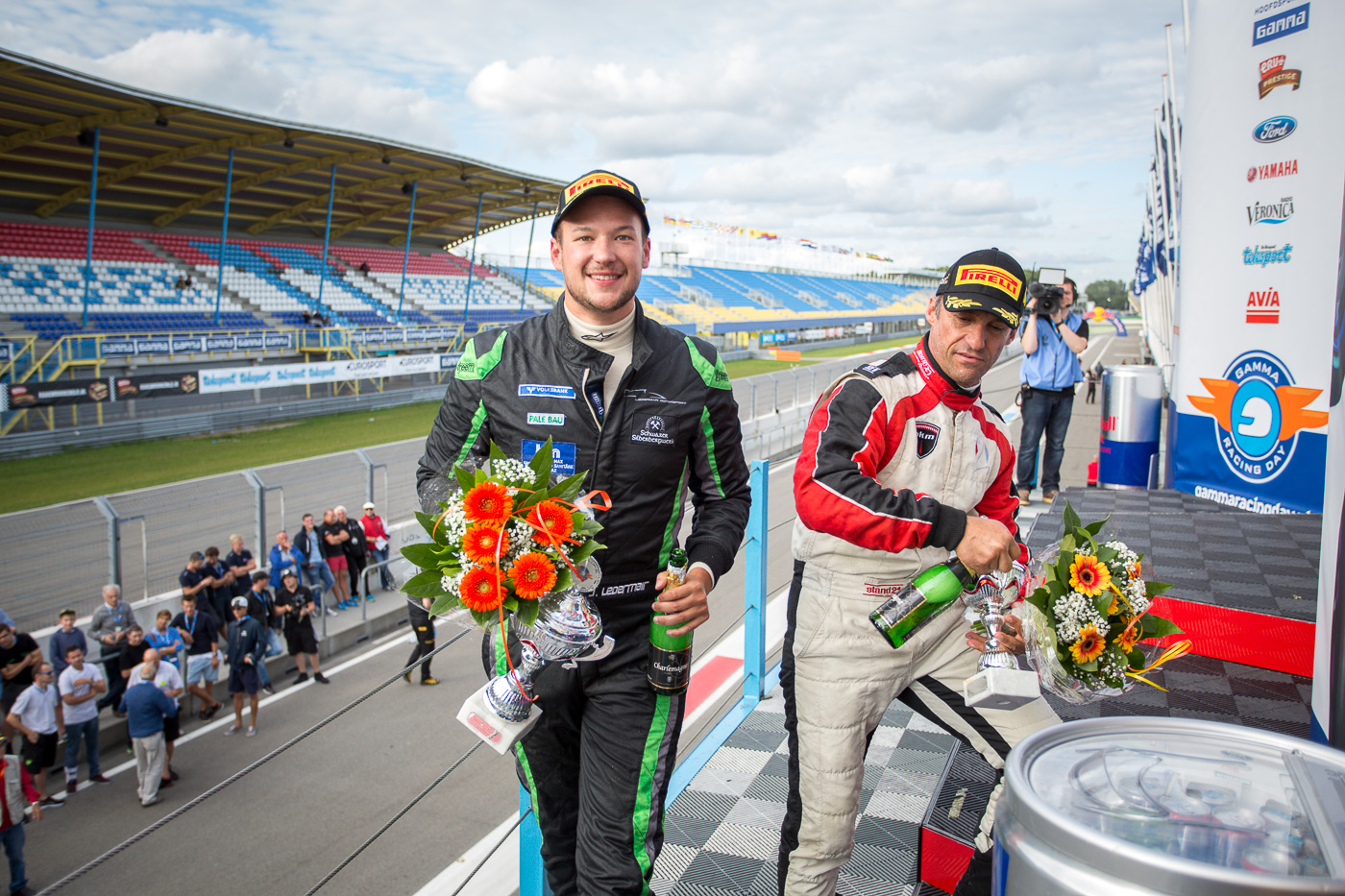 After a free practice session, which ended with an horrifying crash of OPEN class driver Klaas Zwart (Team Ascari) and a smooth Qualifying with Johann Ledermair (Ledermair Motorsport) finishing as fastest driver of the FORMULA class, teams and spectators finally experienced quite a strange race at the end of the day at the „Gamma Racing Days“ in Assen.

Race started with quite a long safety car phase. Wolfgang Jordan (H&A Racing) collided and crashed on the start/finish straight just when the race was started. As a result drivers had to stay behind the safety car for the next four laps. When the track was released, Johann Ledermair had the lead, kept the lead and finished as overall leader of complete race (both classes) as well as P1 of the FORMULA class. The Austrian performed his best lap in 1:25,655 min. „I’m very satisfied with our performance this weekend so far“, Ledermair explained after the race. „We managed to solve a technical problem, which improved the performance of the car significantly. I had a good feeling and good performance already during Qualifying, so I’m happy, that I managed to repeat this performance at the race. I love racing in Assen, it is always a highlight of the race calendar. I look forward to the second race on Sunday and hope for for a good performance again.“

Ledermair was followed by Mahaveer Raghunathan (PS Racing by Coloni Motorsport), who finished the race on P2 and raced his best lap in 1:28,825. The Indian was overtaken by Salvatore De Plano (MM International Motorsport) directly after the start, but stepped back to position 2 of the grid in lap 5. „I’m fine with the result. Due to the long safety car phase in the beginning of the race, I wasn’t able to attack and push as I actually would have wanted to“, Raghunathan told us after the race. 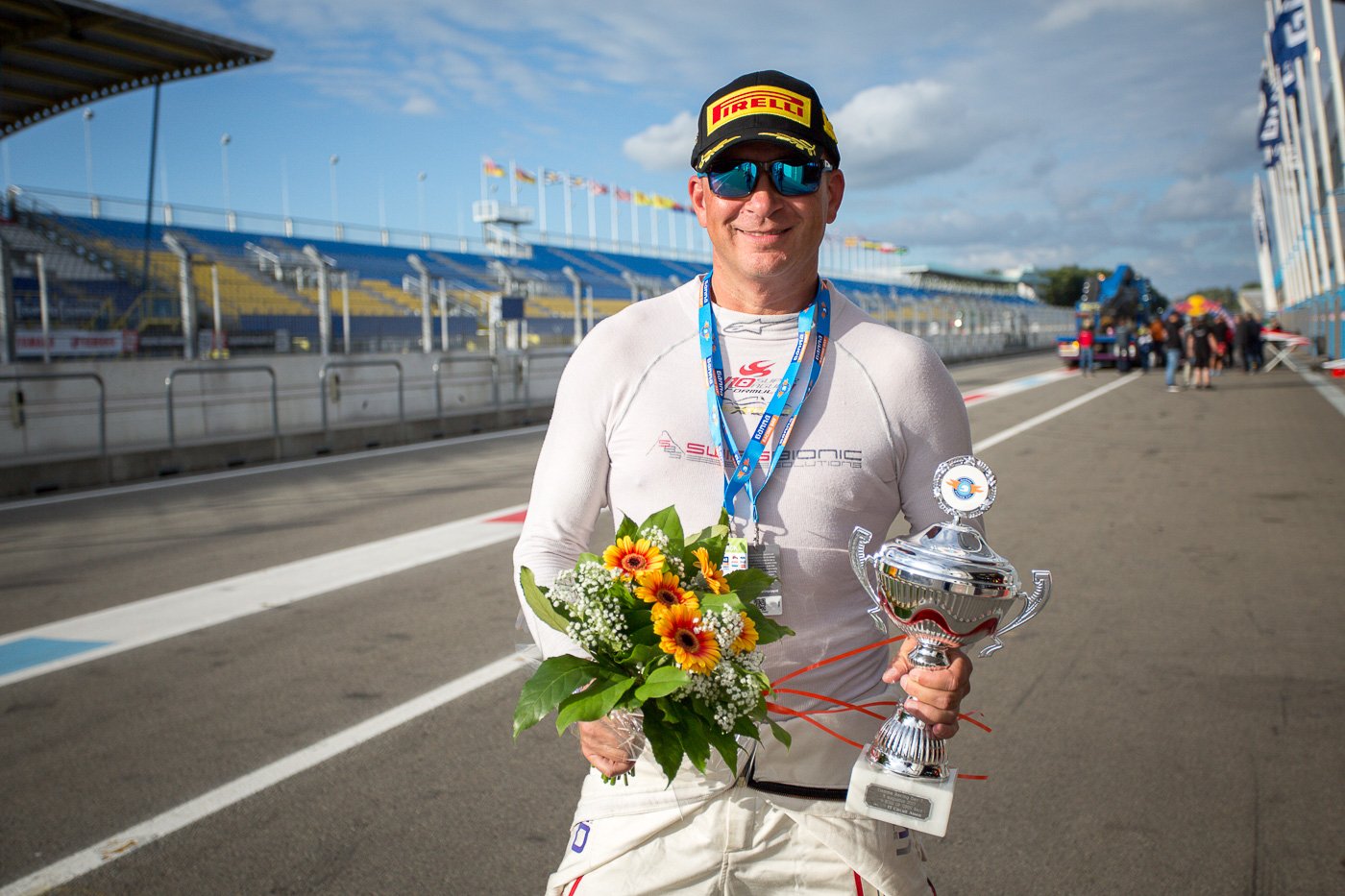 After a free practice session, which ended with an horrifying crash of OPEN class driver Klaas Zwart (Team Ascari) and a smooth Qualifying with Ingo Gerstl (Top Speed) setting up the pole position, teams and spectators experienced quite a strange race at the end of the day at the „Gamma Racing Days“ in Assen.

For the first time this season current leader of the OPEN class overall ranking Ingo Gerstl didn’t finish his race. He spun off the track already in the warm up lap. „I passed an oil spill and twisted from the track“, Gerstl explained later. „Everything is fine, the car is totally flawless. It was just not possible, to return on track.“ The Austrian now will set full power at the second race of the weekend on Sunday afternoon. Spun from the track in the warm up lap: Ingo Gerstl.

So Wolfgang Jaksch was the only remaining OPEN class driver at the grid. And he managed well. After passing a safety car phase for four laps, due to a crash and twister of Wolfgang Jordan (H&A Racing) on the home straights, Jaksch overtook Marc Faggionato (Zig Zag) in lap 5 and the overall position 3 of the grid for the next three laps. While temporarily leaving the track due to an driving error, Jaksch fell back to position 4 in lap eight and even was overtaken by Salvatore De Plano in the last lap. The German finished on position 5 of the overall start grid, but made it to P1 of the BOSS GP OPEN class.

„It’s the first ever P1 in the BOSS GP, since I started racing here three years ago“, Jaksch told us after the race. „Actually I don’t feel that overwhelmed about the way, the result was achieved. Yes, I am happy about P1 and the points for the championship, but honestly it wasn’t a nice race for spectators as well as drivers“, Jaksch pointed to the long safety car phase, which affected the race significantly. „After the strange free practice in the morning with the crash of Klaas Zwart and the crash at the beginning of the race itself, my main focus was, to bring that race and the car home safely.“ Now on position 2 of the overall OPEN class ranking, Jaksch is excited about a much better race on Sunday: „I look forward very much to the race on Sunday. There will be a huge amount of spectators, that’s always a lot of fun and great atmosphere for the drivers. I hope, that all drivers of the grid will finish the race – that’s great entertainment for fans and spectators as well.“

This is the result of the OPEN class at race 1 in Assen: 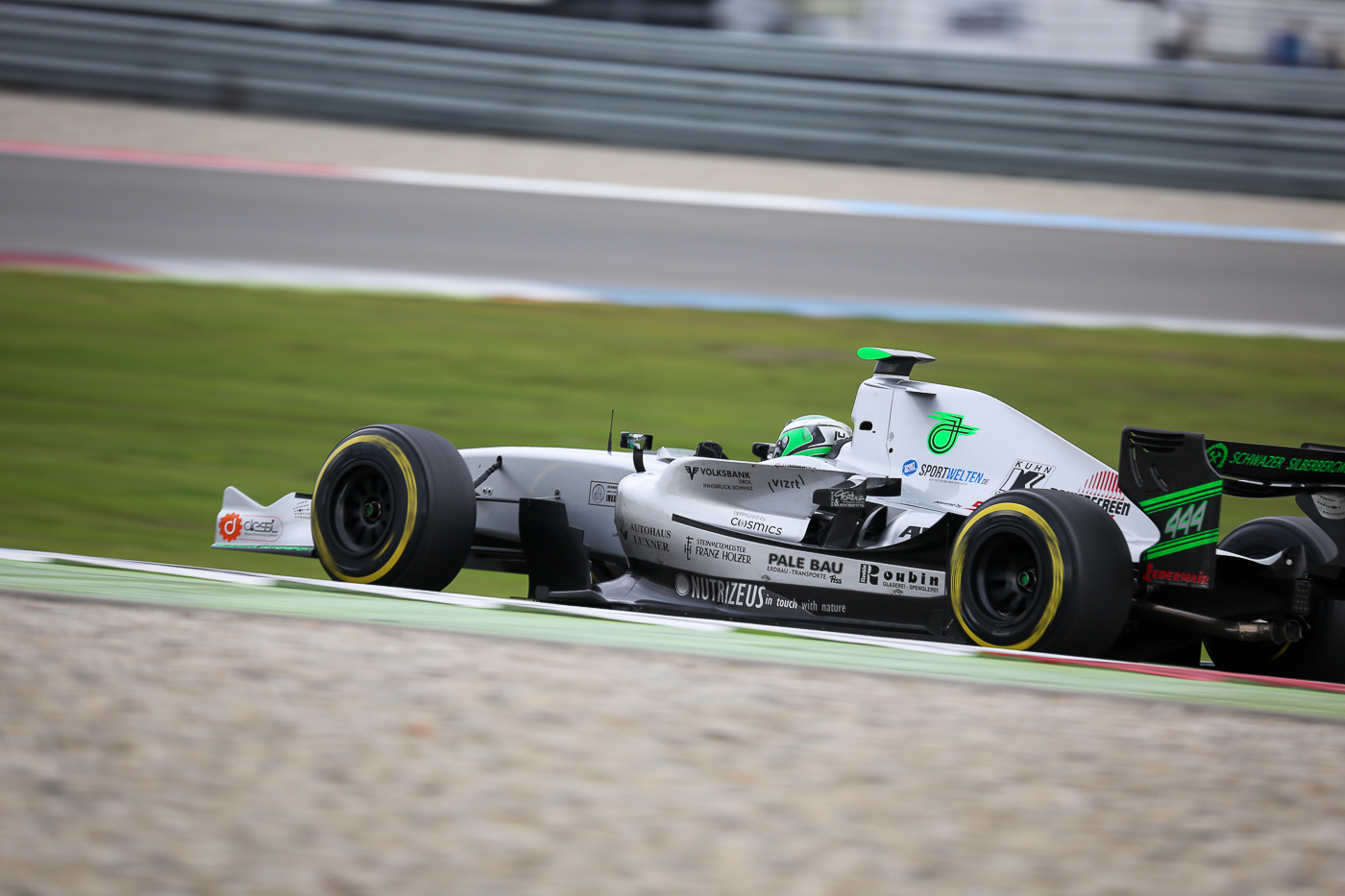 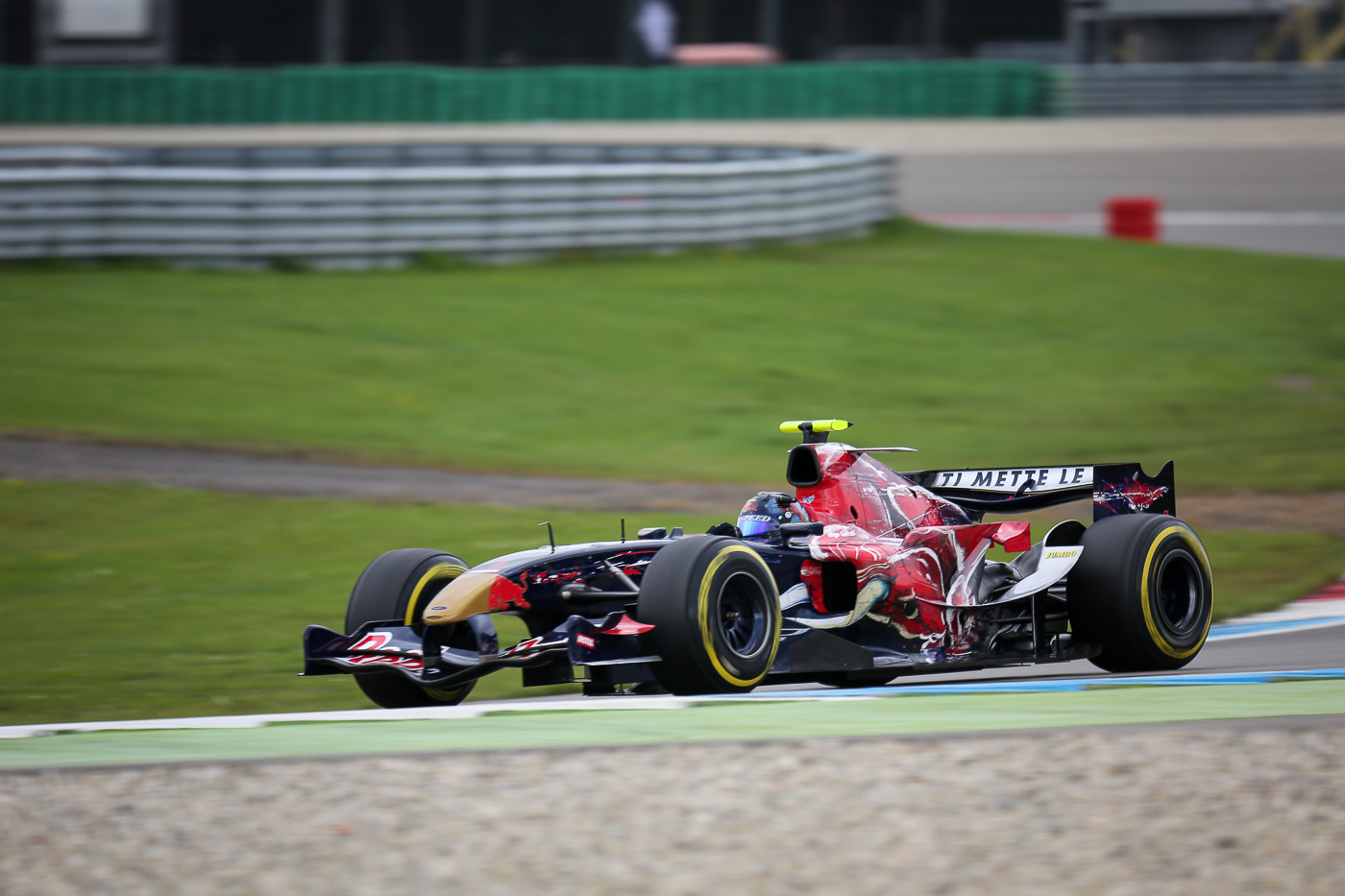 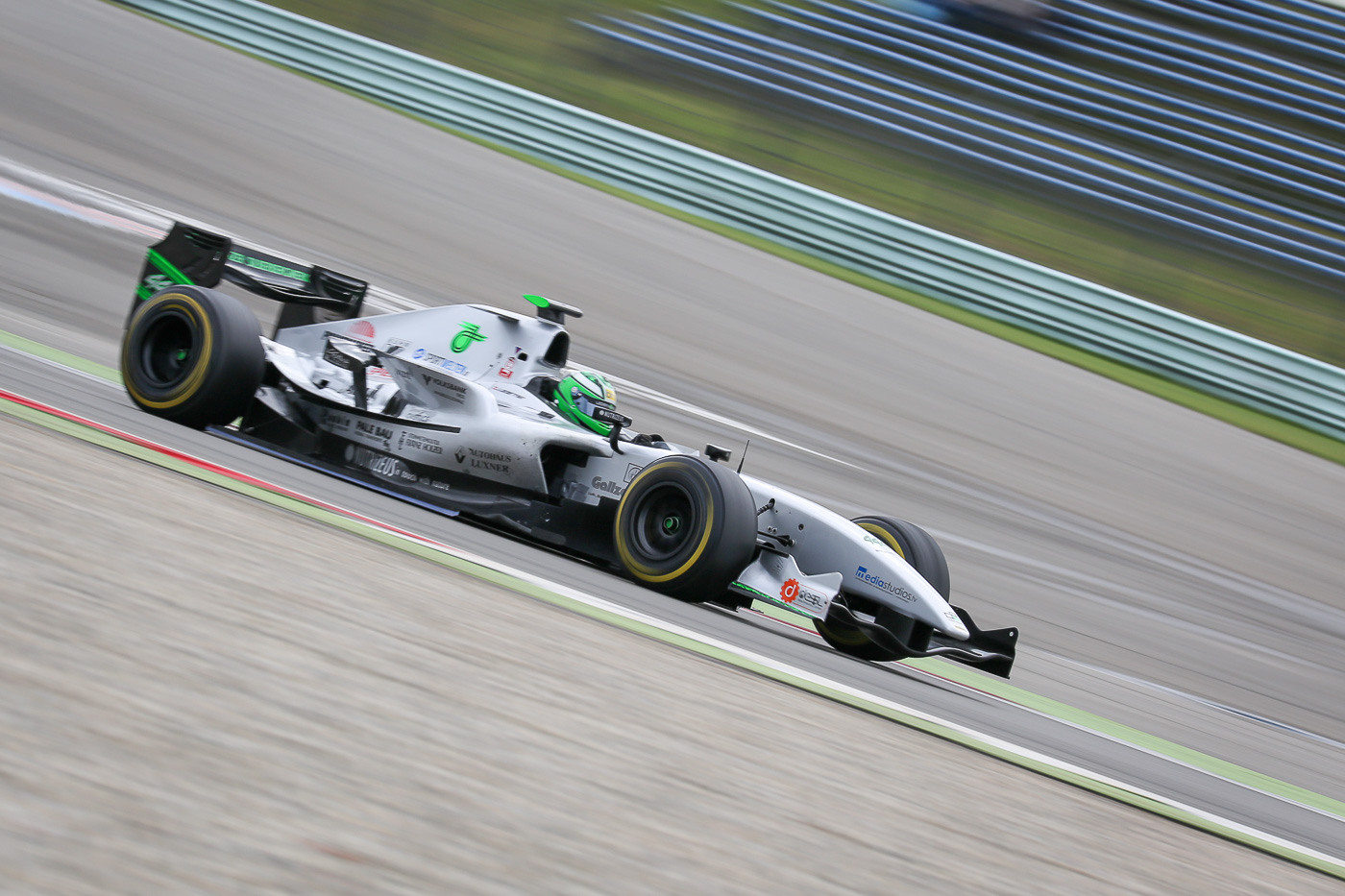 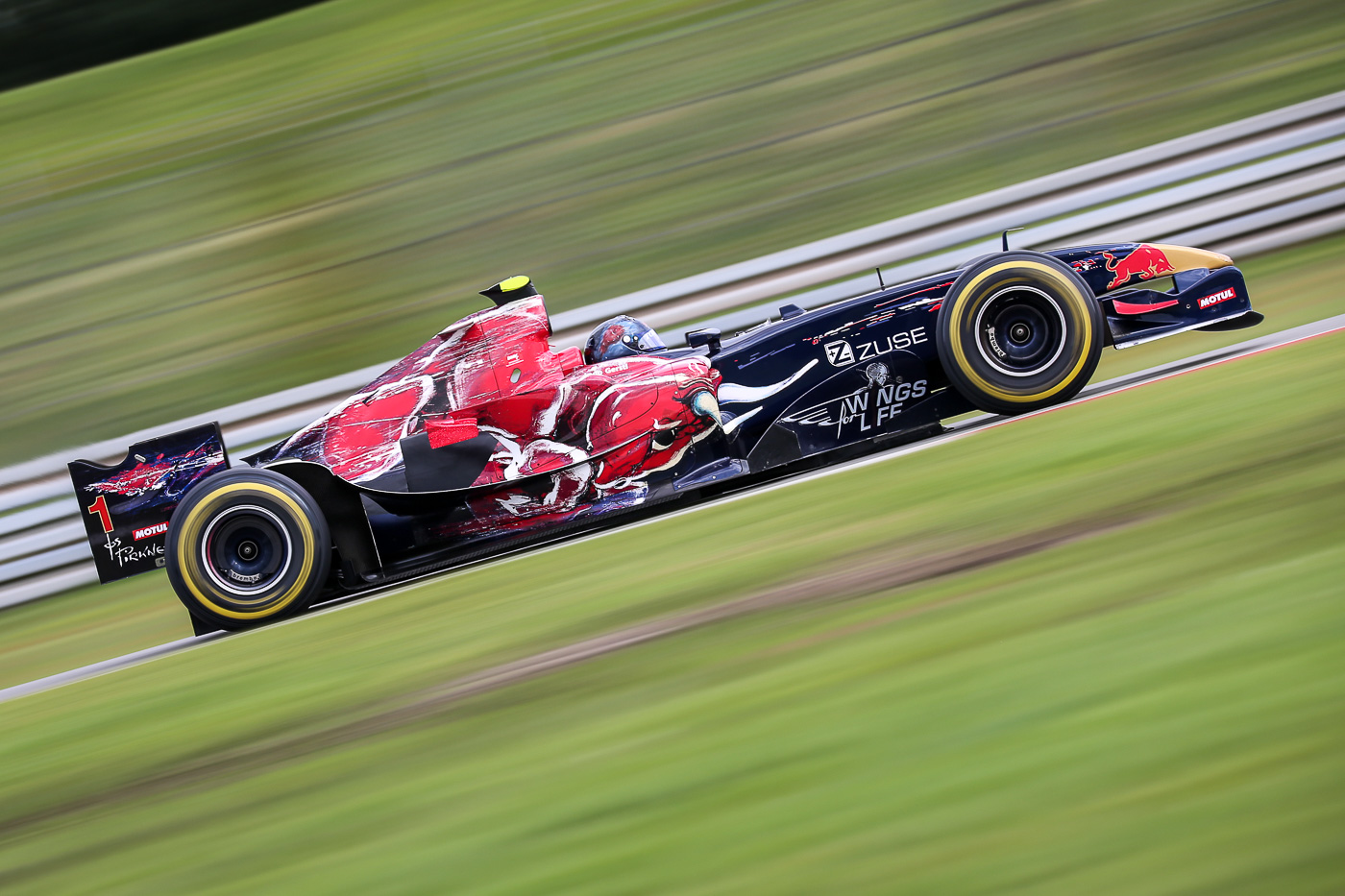 It was not a good day for Klaas Zwart in front of his home audience. While overtaking Marc Fagionatti (Team Zig Zag, FORMULA class) with still seven minutes of the practice session to go, the Dutch flew off the track, crashed into the wall at the beginning of the curve to the home stretch at high speed with his car catching fire. Luckily the Dutch wasn’t injured at the heavy crash, but his Jaguar R5 suffered serious damage. „I feel pure frustration“, Zwart told us after the crash. „I overtook him, probably he didn’t see me. I felt a hit and catapulted of the track. Luckily I’m fine, no injuries. I hope, we can fix the car.“