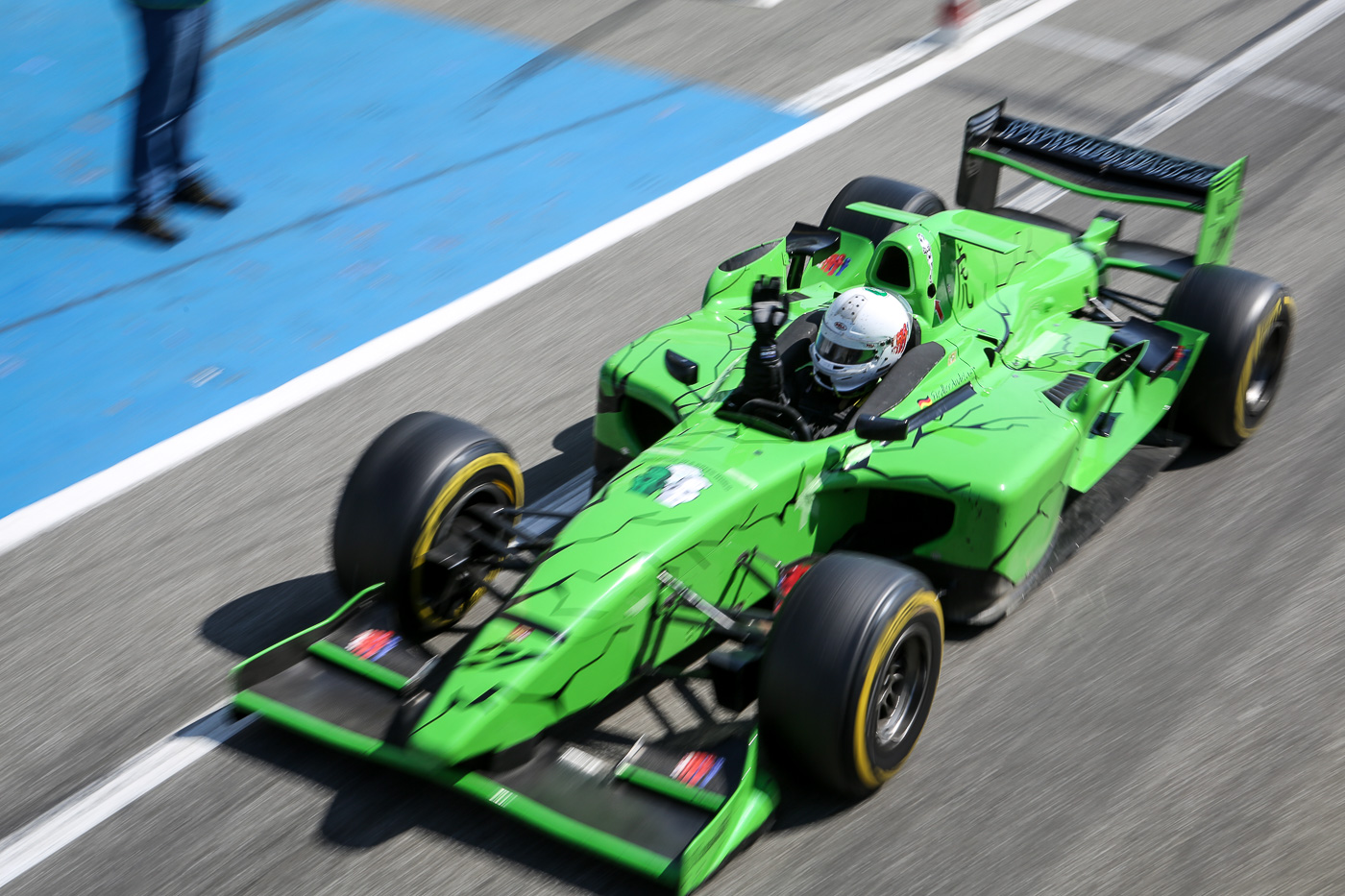 Preliminary start: 13 drivers and two female drivers entered the second race of the weekend, which demanded everything from both the drivers and the Pirelli tyres. The Austrian Thomas Jakoubek (Top Speed) did not participate like yesterday, Salvatore de Plano had to stay in hospital overnight after his crash in race one. The Italian had injured his back, but is on the road to recovery. Bernd Herndlhofer (H&A) and Wolfgang Jaksch (F Xtreme Racing Team) had already retired before qualifying, so there were only two starters left in the top class.

Start: From the start Ingo Gerstl set the pace. 1:25.5 min at the beginning of the race proved that there is nothing to win here for Phil Stratford in his Benetton. Gerstl said after the race: “I wanted to show at the beginning what I could do.” They stayed within a six-second margin for the whole race, at the end Gerstl crossed the finish line three seconds ahead. Stratford was pleased with Gerstl’s pace: “I’m happy to follow and feel the air turbulences, the aerodynamics, when I can drive so close to Ingo’s Toro Rosso”.

Lap 1: John Reaks had to brake across the grass, but the Briton could continue and finish last, four laps behind the leaders.

Florian Schnitzenbaumer (Top Speed), yesterday’s FORMULA winner, had less work today. His equal opponent de Plano was missing, so the German set the pace in the smaller class. Armando Mangini was able to keep up with Schnitzenbaumer’s speed for a while, driving 1:21 times – the Italian did not have the consistency of the German, even though Schnitzenbaumer’s shoulder hurt: “In the middle of the race I felt uncomfortable due an old operation”.

Manfred Loach wanted to bring a good result home today after retiring early yesterday due to an increased oil temperature. After a bad start the Austrian fought his way forward place by place.

Lap 2: “Piter” in the white Dallara from the World Series had to fight with the same difficulties as yesterday. Twice he stopped after the slowest part of the course, accelerating out of the hairpin – twice he was able to continue. But after four laps he drove into the pits.

The man of the race was German Andreas Fiedler in GP2, who started from 10th place and passed FORMULA driver Bianca Steiner, who had previously finished third, who was targeting on a podium as she did yesterday. A self-error led to a spin in the first race, today she made no mistakes and finished 4th in the FORMULA. “We had too much tyre pressure. At the end of the race I come closer again on Andreas. One more lap, maybe then …” Fiedler thus reached his first podium. The German with the GP2-Dallara machine became third FORMULA driver behind Schnitzenbaumer and Mangini.

Lap 6: Veronika Cicha got stuck in fourth gear, on the approach to the hairpin with almost 200 km/h. She touched the tyre bundles with her nose, but was not injured.

Lap 7: Shortly afterwards Peter Göllner parked his car in turn 2-3. The marshals worked quickly, so the safety car was able to stay in the pits today.

Last lap: Loach bets 8th in the fight to attack Walter Steding (Inter Europol Competition) and spun. It was the last retirement of the race. Karl-Heinz Becker finished seventh and the almost 75-year-old achieved a sensational result. The results of the second race of BOSS GP 2018: