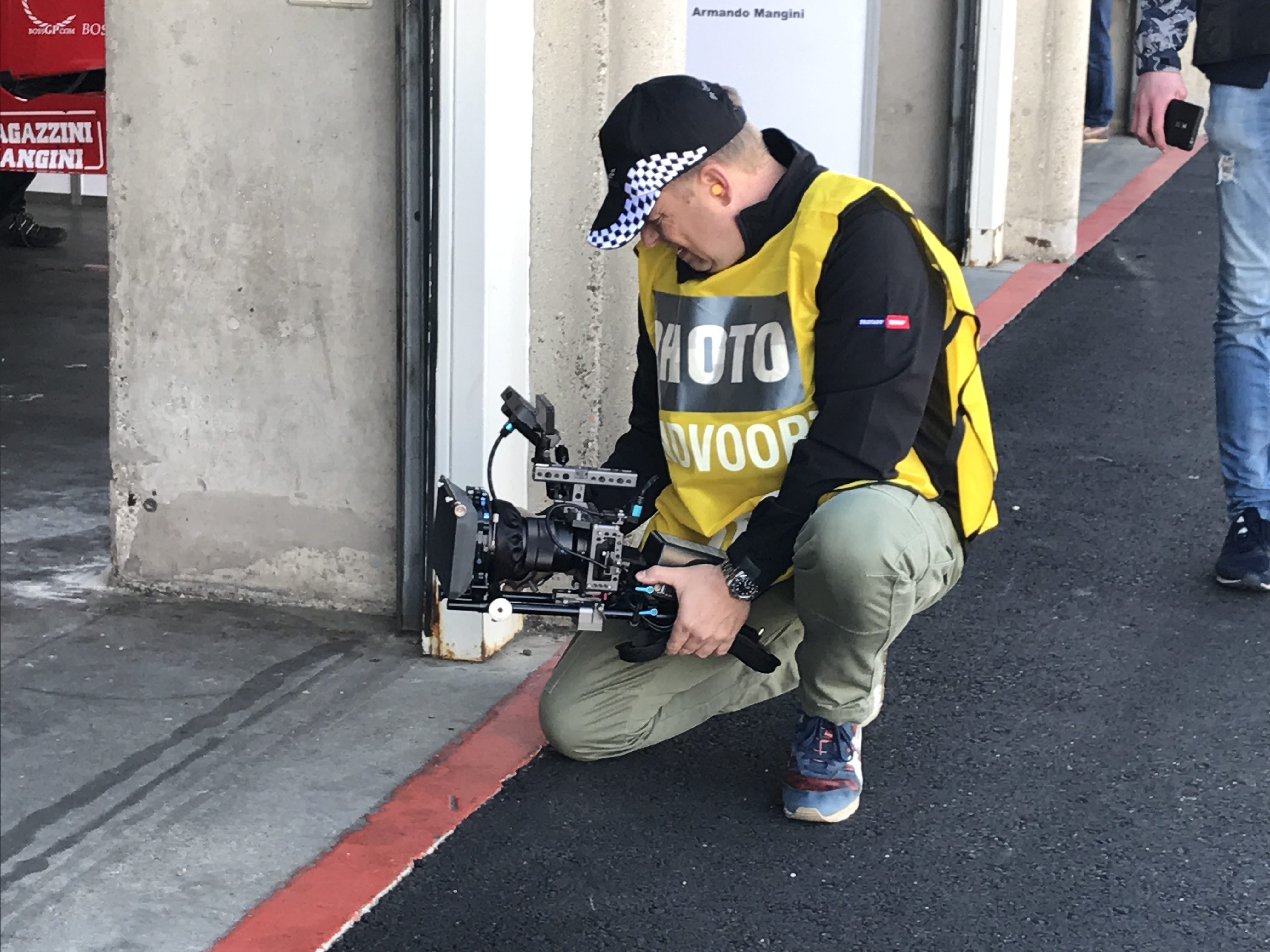 A couple of days ago BOSS GP crews, fans and about 100.000 motorsport enthusiasts experienced a great weekend in Zandvoort (NED) at the “Jumbo Racedagen, driven by Max Verstappen”. BOSS GP was part of a fully loaded race weekend, with Johann Ledermair (Ledermair Motorsport) winning both races. For the first time this season the weekend was accompanied by  a camera-team and camera-operator Chris.

The Dutch love motorsport. And the love their national hero Max Verstappen, who is racing at the Formula 1 for the Red Bull Racing Team. The “Jumbo Racedagen, driven by Max Verstappen” in the little town on the North sea  coast, 40 km west of Amsterdam, were not only host for the Dutch F1-driver, but also for season races 3 and 4 of the BOSS GP championship 2017. The crowd of about 100.000 spectators went crazy, as soon as Max Verstappen bombed down the track. But the motorsport enthusiasts along the track loved the sound and speed of the BOSS GP as well. There was a huge crowd around the boxes of the impressing BOSS GP cars, especially around the boxes of the two local heroes, Marijn and Rinus van Kalmthout. As you can say – the Dutch really love motorsport.

BOSS GP team was lucky, to was accompanied by a camera-operator for the first time in season 2017 on the weekend in Zandvoort. Chris put the images together and created a great video, which shows, what BOSS GP is all about. Lean back and enjoy:

PS: Next chance, to experience these impressions live on your own is on 10th + 11th of June 2017 on the Circuit Paul Ricard in France. See you there! 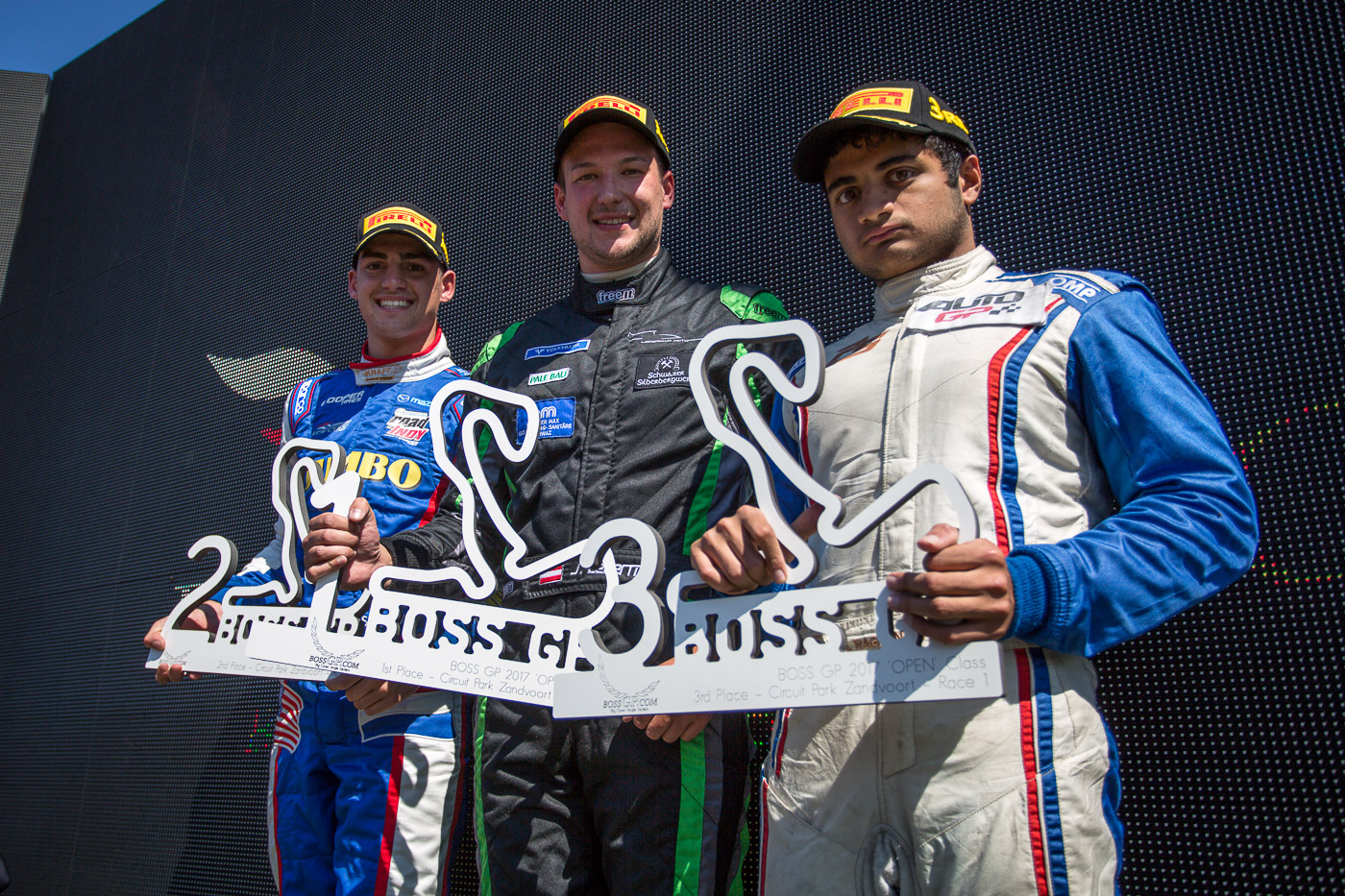 Thinking, a super-fast qualifying was a blast today, one has to find a new superlative for the sensation, that happened at the first race of the “Jumbo Race Festival” in Zandvoort on Saturday afternoon. Austrian youngster Johann Ledermair (Ledermair Motorsport) was not only dominating the FORMULA class clearly, but also beat local hero Rinus van Kalmthout (Mansell Motorsport) of the OPEN class.

Hoping for an exciting first race at the “Jumbo Race Festival” in Zandvoort expectations were fulfilled, when Johann Ledermair of the FORMULA class in his Dallara GP2 beat Rinus van Kalmthout of the OPEN class in the Dallara GP1 Evo. While Ledermair set the lap record at 1:24.193 min, Rinus van Kalmthout finished his best lap in 1:24.549 min. Both youngsters enjoyed a clear lead of the grid, topped by a spectacular overtaking of Johann Ledermair in round 10, leading the grid for the last five laps on and bringing P1 home.

„This was a real strong competition. But I think, I managed well throughout the race”, winning Johann Ledermair, who had started from position 3, analyzed his performance after the awards ceremony. “I was able, to take the second position directly after the start, but having still quite a gap to the leading Rinus von Kalmthout. I moved closer step by step, always considering the conditions of the tyres well, got the kick and finally attacked van Kalmthout. While he overtook me back instantly at the first try, I got him at the second time and it was just a “now or never, bring that home”-motivation for me. So finally, I made it and got that victory home.” Johann Ledermair taking the P1 of season race 3 in Zandvoort 2017.

So P2 was owned by the youngest driver of the grid, BOSS GP-newcomer Rinus von Kalmthout. Starting from the pole positing and showing the thrilling fight with Johann Ledermair the 16 years old Dutch finished with the overall P2, owning the P1 of the OPEN class.

P2 of the FORMULA class, Mahaveer Raghunathan (Coloni Motorsport), was fine with his podium position so far and a lap record of 1:28.344 min, but not 100% happy: “I could have gone for a better result, if I wouldn’t have been blocked by another driver”, 18 years old Raghunathan was not that satisfied. “I will go for this tomorrow and improve at the race on Sunday”, the P2 from India is more than motivated for season race 4.

Happy with the P3 of the FORMULA class and his first podium position of the season was Salvatore de Plano (MM International Motorsport) with his fastest lap in 1:29.180 min, followed by BOSS GP returnee Marc Fagionatto (Zig Zag) in 1:29.853 min. Meanwhile the OPEN class provided a really clear arrangement: Rinus van Kalmthout on the P1 was just followed by his father, Marijn van Kalmthout (Mansell Motorsport). The experienced driver suffered problems with a tyre in round 5 and was forced to a pit stop. He finished the race with a total of 11 laps on the 11th position, nevertheless ranked in P2 of the OPEN class, since there were registered only two starters in the OPEN class at all in Zandvoort. So, after an exciting first race day P1, Johann Ledermair, made a final statement about the key to success for winning the overall ranking at season race 3. “Winning today was also the result of an intensive practice-day on Friday and a lot of work after he second practice”, Ledermair explains. “My team did an incredible great job and put a lot of effort into the car until late into the night. Without them I couldn’t have done the race so well. We completely changed the setup of the car, after having quite a lot of problems during the first practice sessions. We made great progress at the second practice in the afternoon and after still some more changes for the race day we could progress once more for the Qualifying as well as the race.” Ledermairs coach, Oliver Saringer, was as well proud as thrilled about the performance of his Youngster: “It is a fact, that we won the OPEN class with a FORMULA car. That has never happened before”, he made the point.

The podium of the race means starting from pole position for Johann Ledermair in Sundays race. After the thrilling first race in Zandvoort, spectators and fans can look forward to another exciting battle between Ledermair and Rinus van Kalmthout again on Sunday, when the Dutch youngster will start from position 2. Startgrid of second race in Zandvoort 2017.

Report of Qualifying in Zandvoort: bossgp.com/qualifying-in-zandvoort-hell-of-laptimes-for-the-van-kalmthouts 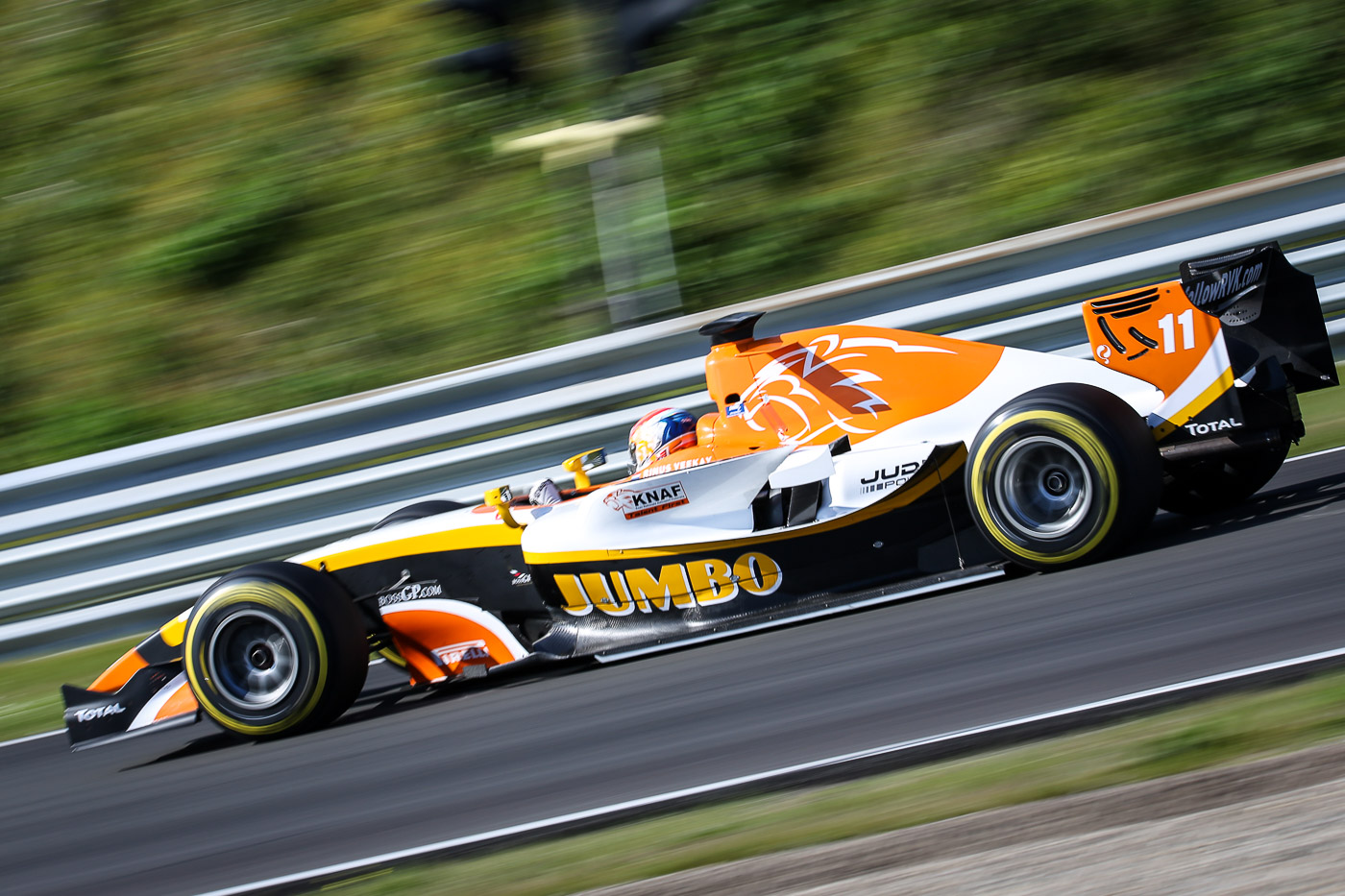 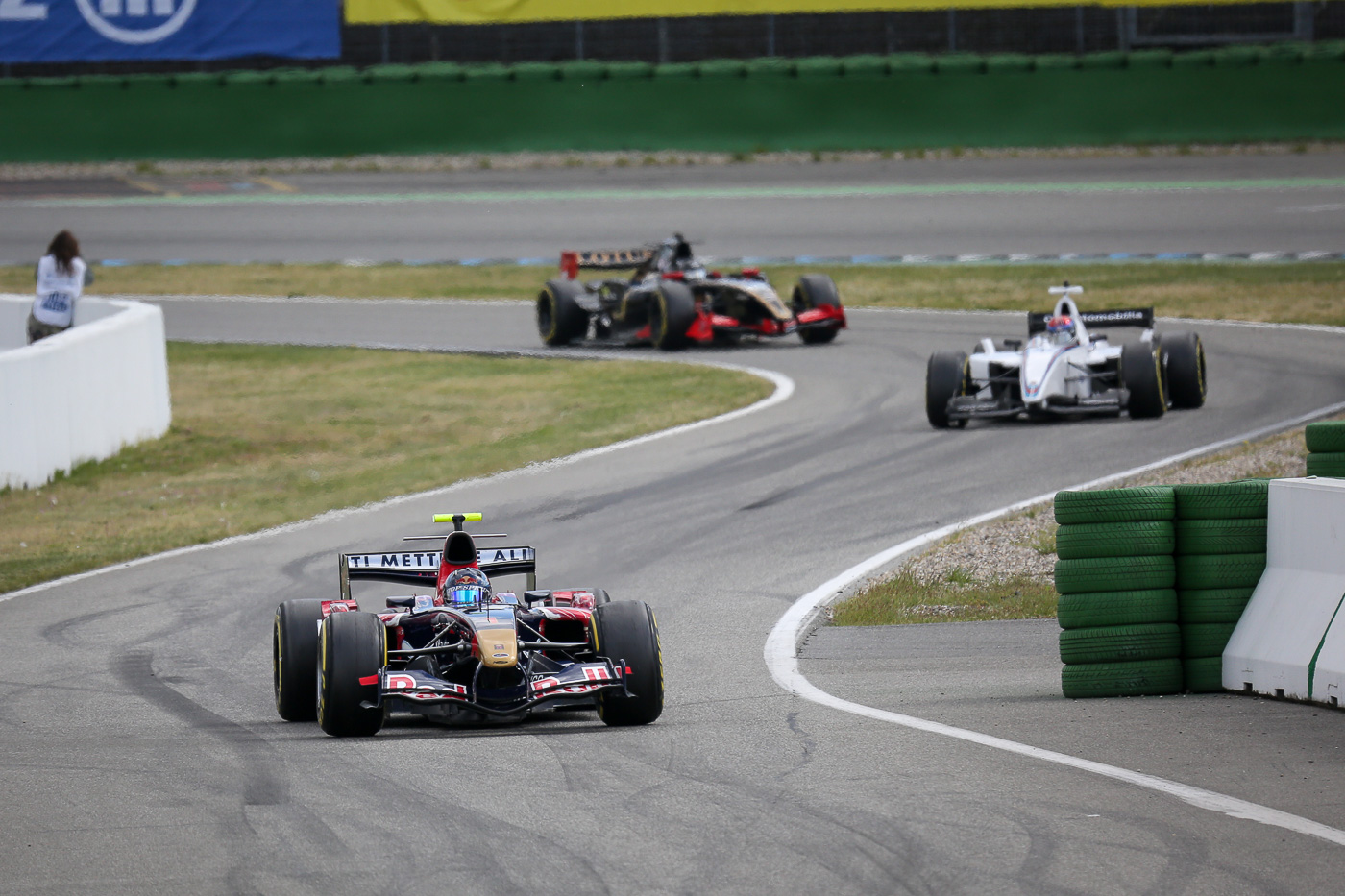 First two races of season 2017 are done, the next ones are right behind the corner: The “Jumbo Familie Racedagen”, i.e. the Jumbo Race Festival by Max Verstappen, at the Zandvoort Circuit (Netherlands) will be the venue for race 3 and 4 of BOSS GP Championship 2017. The event will take place from 19th to 21st of May 2017.

About 30 km in the west of Netherlands capital Amsterdam the Circuit Park Zandvoort is awaiting the BOSS GP drivers and teams for two spectacular races. BOSS GP will be an important part of the “Jumbo Familie Racedagen”, which will attract motorsport enthusiasts of all ages. In addition to different demonstrations, e.g. by Formula 1 driver and event name giver Max Verstappen, a couple of races will take place at the Jumbo Days in Zandvoort. BOSS GP will not only race for the next podiums of the season, but also show spectators and fans, what pure motorsport, noise and speed mean. Race 3 of  the BOSS GP season is scheduled for Saturday (20/05/2017), race 4 for Sunday (21/05/2017).

Driver registration for the races in Zandvoort is currently going on and will end next Thursday, 11th of May 2017. Registration can be done online, just follow this link: bossgp.com/registration/zandvoort-2017/

Zandvoort is the second stop of the Championship 2017 season. Seven races all over Europe with stations in Germany, Netherlands, France, Belgium, Czech Republic and Italy will make up the complete 2017 BOSS GP Championship season. First two races of the season are done

The BOSS GP team as well as fans and spectators look forward to an exciting starting grid on the track of Zandvoort!