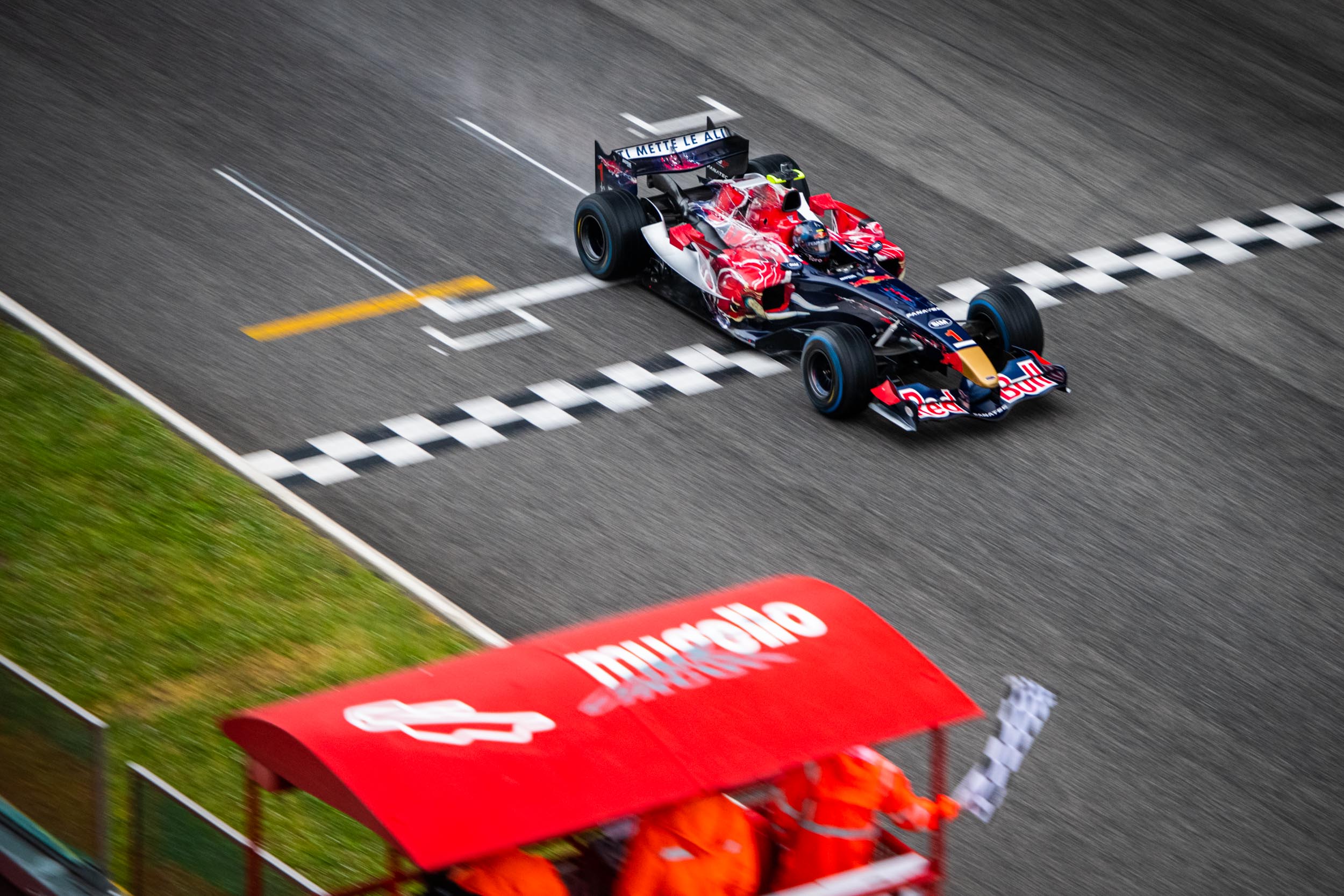 Gerstl wins in the OPEN category, Ghiotto after recovering from an early spin in FORMULA class.

Another day, same question: dry or wet tyres? It had rained again and again at the Mugello Circuit during the day. But shortly before the start of the second race, parts of the track had dried up. Most of the drivers nevertheless relied on the Pirelli Cinturato rain tyres, even at the risk that they would not last the full 25-minute distance on an increasingly dry track. Exceptions were the two MM-International drivers Stefano Colombo and Luca Martucci (both ITA), who started the race on slicks. But with low outside temperatures of around ten degrees Celsius, they had a tough time in their GP2 Dallara single seaters.

Not so Ingo Gerstl (AUT, Top Speed), who immediately fled at the start. The pole setter entered turn 1 in his Toro Rosso STR1 first and did not relinquish his position at the top until the end of the race. Second in the OPEN classification was Ulf Ehninger (GER, ESBA Racing), who, after his premiere victory yesterday, also finished on the podium today and, together with Gerstl, will travel to the next race as BOSS GP championship leader.

In FORMULA class, Marco Ghiotto (ITA, Scuderia Palladio) won today as in race 1. The decisive move was made by the Italian just before the end of the race. Ghiotto had spun in lap 1 and then started a terrific chase that had its climax on the penultimate lap: Marc Faggionato (MCO, Zig-Zag) defended his lead hard, but always remained fair. The decisive manoeuvre came at the exit of the medium-fast turn 12, where Ghiotto poked into a gap on the inside lane and overtook Faggionato. Gianluca De Lorenzi (SMR, GDL Racing) finished third in the class behind the two, sticking to the rear of Faggionato for a long time but ultimately having to let Ghiotto go as well.

Fourth place went to Salvatore De Plano (ITA, MM International), who made amends today after an early retirement yesterday. Andreas Fiedler (GER, Fiedler Racing) changed to rain tyres shortly before the start, which helped him to move up to 5th in class. Thomas Jackermeier (GER, Top Speed) achieved another convincing result at his first BOSS GP event with 6th position. Behind him came Walter Colacino (ITA) in the Formula 3000 with an Alfa Romeo sports car engine, who was able to drive the full 25 minutes of the race today without any troubles.

The overall standings after the first of six race weekends are available here. 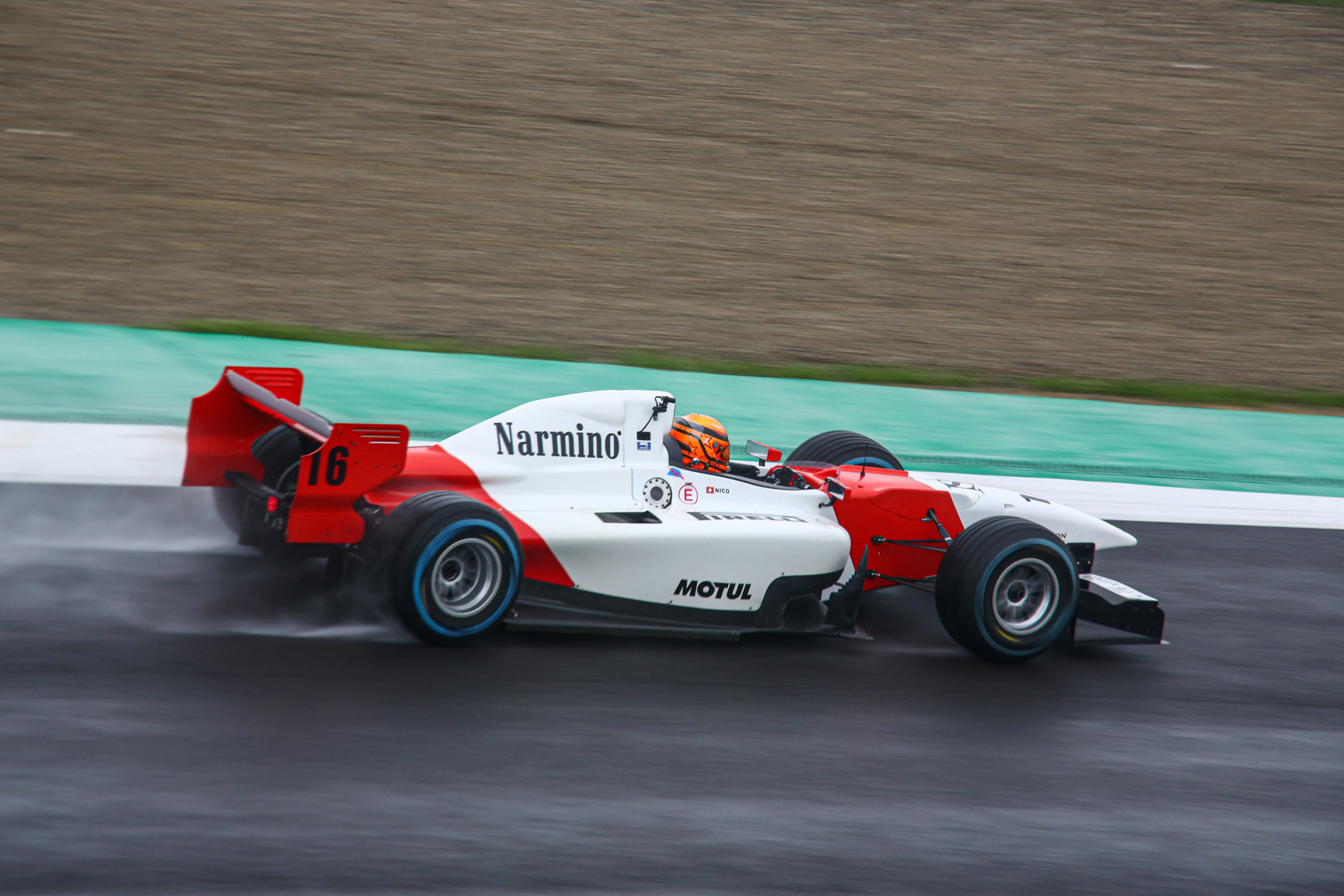 The BOSS GP Racing Series makes it possible: The upcoming weekend will mark the start of the new season for teams and drivers with their Formula 1, Formula 2, Formula 3000 and Auto GP bolides. At the season opening of Europe’s fastest racing series, one of the most beautiful racetracks in the world awaits the youngsters and gentlemen of BOSS GP. The 5.245-kilometre track in Mugello (built in 1974) is owned by Ferrari and traditionally hosts the World Motorcycle Championship. Last year, the circuit in Tuscany also hosted a Formula 1 race for the first time. The sequences of curves are usually smooth and fast, the topography hilly – all in all an absolute favourite track for many race drivers.

After a few years of abstinence, Mugello was added back into the Big Open Single Seater race calendar last year. The Cuvee Sensorium Grand Prix became the season finale in October 2020. The first race was dominated by the duel for the FORMULA championship title between Luca Martucci (ITA, MM International) and Marco Ghiotto (ITA, Scuderia Palladio). Although Martucci won his first BOSS GP race, second place was enough for Ghiotto to defend his title. In rainy conditions again, a lot of courage and skill was demanded of the drivers in race 2. Both were combined by Andreas Fiedler (GER, Fiedler Racing), who added a surprising overall victory to a rather disappointing season.

The fact that the BOSS GP Racing Series can start the season as originally planned is also thanks to the race organiser Gruppo Peroni, who is hosting the event at Mugello. The support line-up of BOSS GP includes the one-make trophies Lotus Cup Italia, the Mitjet Italia Racing Series as well as sports prototypes, historic race cars and Porsche regularity classes. Due to the pandemic situation, the paddock and grandstands are not open to fans. BOSS GP hopes to welcome spectators back in our paddock soon.