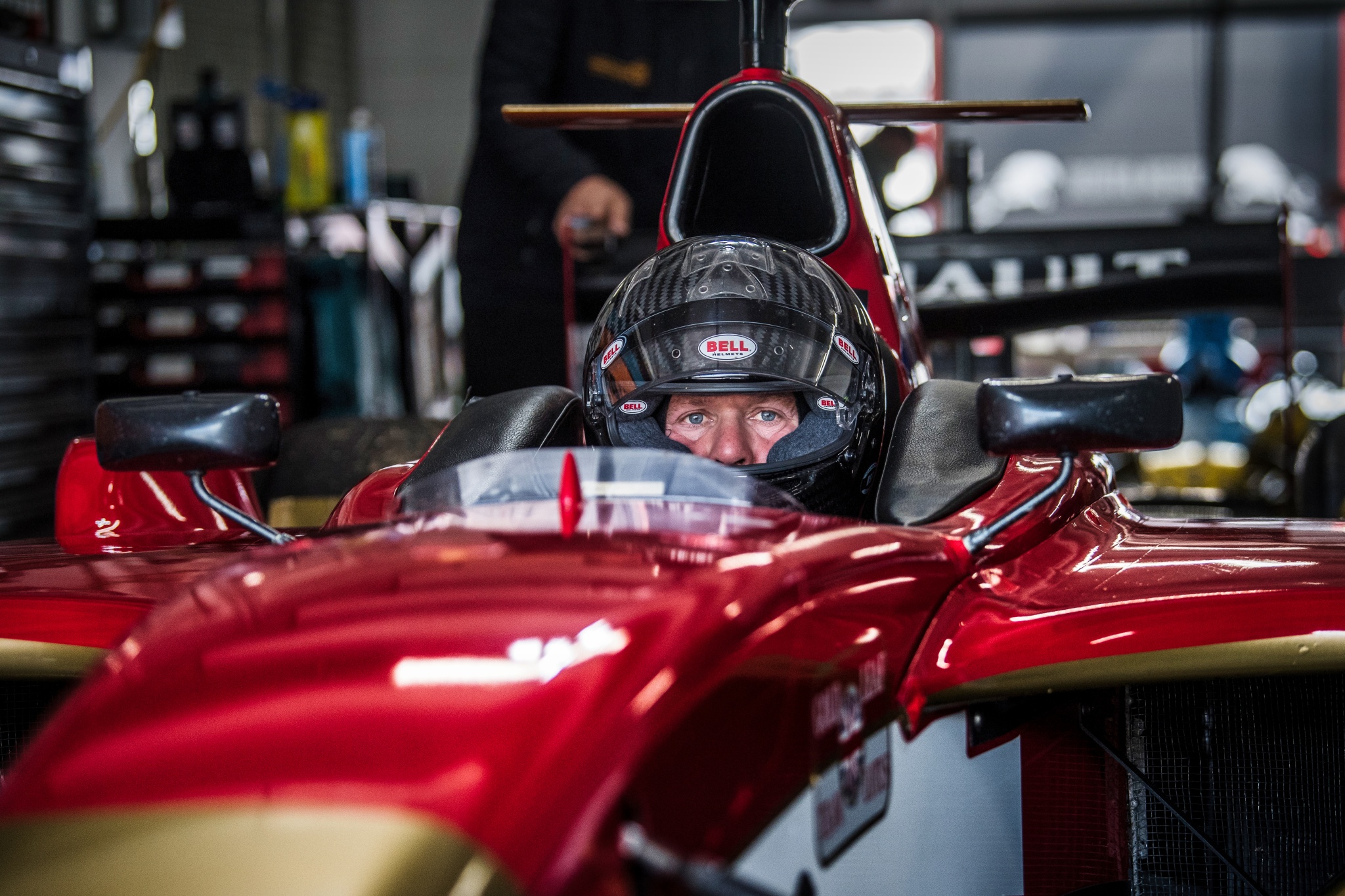 We spoke to Austrian Michael Aberer (50) ahead of his home race at the Red Bull Ring (June 3–5, 2022) and learned why he admires Niki Lauda, but his GP2 Dallara will be on the grid in a retro livery of Jochen Rindt.

What motivates you to drive a GP2 car?

MICHAEL ABERER: “In terms of dimensions, the car suits me. I’m 90 kilos, in Formula 3 you need 70, 75 kilos – it’s simply a smaller car. So the GP2 is a better match for me from a purely physical point of view. And single seaters are my world anyway!”

Do you have a particular hero?

ABERER: “Niki Lauda, I’ve had him on my wall as a poster since I was a child. But also Gerhard Berger, I’m probably closest to him in human terms. Like him, I took care of everything: racing car, business … disco and, of course, girls (laughs).”

But your car is painted like Jochen Rindt’s world champion Lotus, why is that?

ABERER: “I came up with that together with Ingo Gerstl. He thought it was a bit of history and showed me pictures of memorable motorsport designs. Red-white-red are again my colors – so I thought, ‘okay, it will be Jochen Rindt’. Then there was also the 50th anniversary of his death (2020, note) and that’s how it all fell into place. Even though Jochen Rindt raced before my time, as an Austrian his story of course interests me.”

What is your motorsport history so far?

ABERER: “In the classic way, karting and car slalom. I was very successful in car slalom, 30 years ago with a Golf GTi in Vorarlberg. Now it’s different, but in the past these were real racing cars, with a cage inside and the car slalom community was also big. In between I took a little break. Then I started karting again as a hobby and then switched to Formula 3. In 2006, I became champion of the so-called B series.”

Then you took another break …

ABERER: “Yes, in 2012 I stopped completely and let my son Lukas drive. Two years ago, however, I started again. Now I’d like to drive the car a bit more and then I’ll let Lukas go first.”

Two years ago, you raced in the BOSS GP Racing Series for the first time. How is your team made up today?

ABERER: “Currently I have hired the Asche Racing Team with Flo Leitinger as chief mechanic. They are good and for me it makes sense above all that they take care of the car, then I am much freer. They screw and I drive, like a Formula 1 driver (laughs).”

What do you like most about the BOSS GP?

ABERER: “I like the community. Here, many drivers from different nations come together, all around the same age. On the tracks we have our fun, in the evening we sit together at the barbecue. High performance, but also comfortable. We’re not going to be Formula 1 world champions anymore, so we have other ambitions. From a sporting point of view, my goal this year is to make it onto the podium and then we’ll see.” 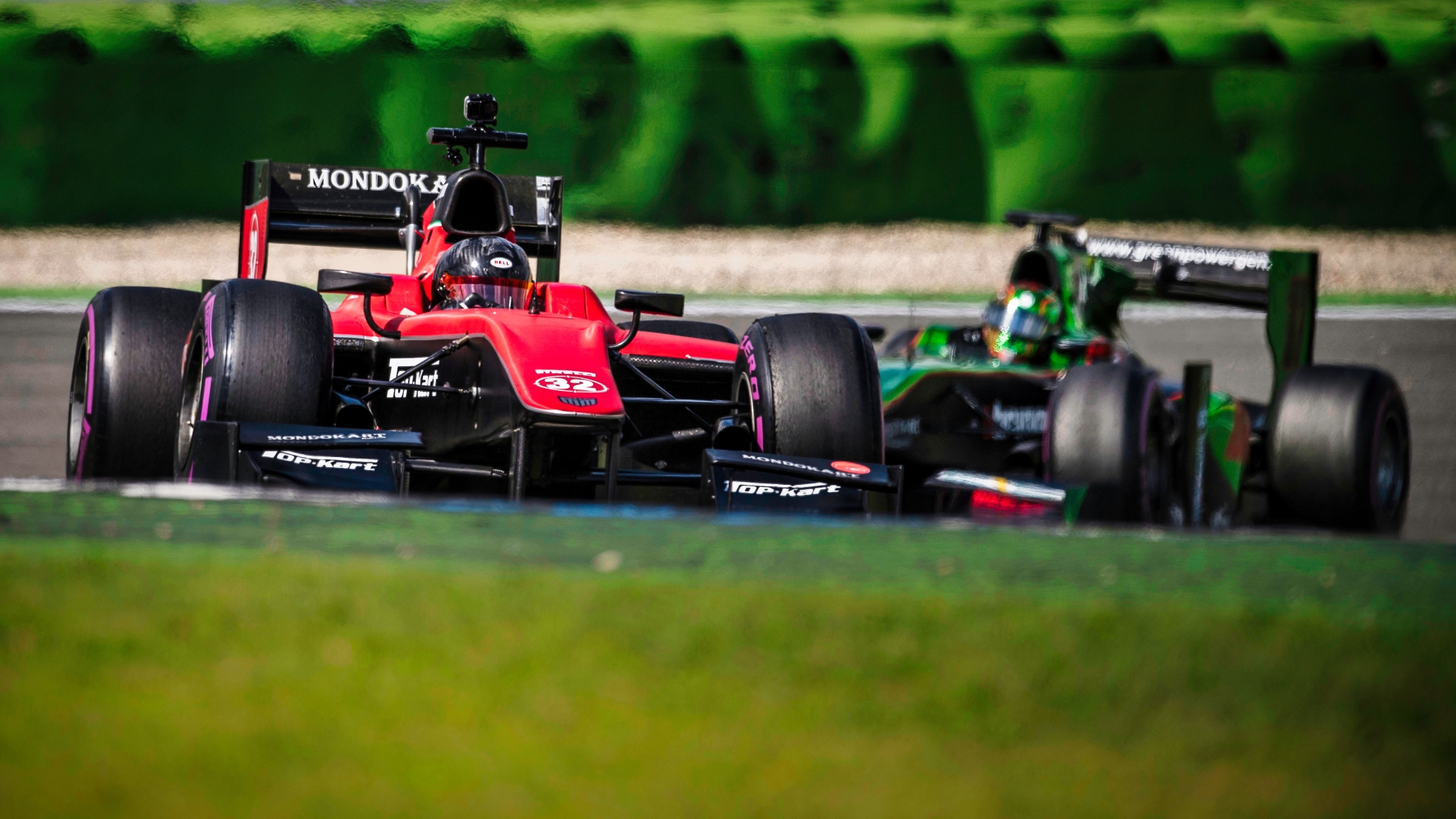 In the fight for victory in the FORMULA classification, the action came to a head on the last lap. Class wins for Gerstl, Schlegelmilch, Colombo and Hasler.

BOSS GP rookie Zdenek Chovanec-Lopez (CZE, MM International) set an incredible pace for almost twenty minutes and already looked like the secure winner when his tyres started to degrade badly. Chovanec-Lopez’s GP2 car clearly started to drift more and more. In a powerslide he still tried to keep the fast-approaching Simone Colombo (ITA, MM International) behind him, but the effort was in vain. Colombo managed his Pirelli P-Zero slicks better and thus took the FORMULA victory in Sunday’s 25-minute race.

Marco Ghiotto (ITA, Scuderia Palladio) was again able to collect a trophy at the podium ceremony, he finished third. Luca Martucci (ITA, MM International) crossed the finish line in an unthankful fourth place. The experienced Italian defeated Michael Aberer (AUT, MA Motorsport), who kept Martucci busy at the beginning of the race. Today, Aberer was able to score a good result after his retirement yesterday.

Paul O’Connell (IRE, HS Engineering) finished sixth in class, ahead of Giancarlo Pedetti, who put in a clean performance as he did yesterday in his BOSS GP debut race. The best German was Walter Steding (Scuderia Palladio) in eighth place. Despite a collision at the start of the race, Alexander Seibold (GER, Scuderia Palladio) was also able to finish the race. Much to the delight of many fans, because Seibold started with a special helmet design as a tribute to the unforgotten Swiss Formula 1 and sports car racer Jo Siffert.

Harald Schlegelmilch (LVA, HS Engineering) in the yellow-and-black World Series V8 machine performed as he did in Race 1 and, starting from last place on the grid, managed to overtake most of the field in the opening laps. The Latvian left all FORMULA cars behind and won the new classification of the modified BOSS GP cars.

After Andreas Hasler (AUT, Hasler Motorsport) could not take part in the race yesterday, the Austrian was eager to get through today. He succeeded and even more: Hasler claimed victory in the SUPER LIGHTS six-cylinder classification.

The two races in the Bosch Hockenheim Historic can be watched in replay at www.hockenheim-historic.de/en/live

The next two races of the BOSS GP Racing Series will follow in four weeks’ time (3-5 June 2022) as part of the Rundstreckentrophy at the Red Bull Ring in Spielberg.

Note: The overall standings are currently still unofficial, as the modified FORMULA car class is only just being added to the regulations.